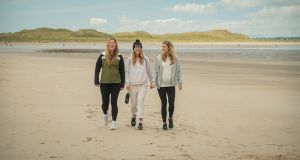 When the second flight home was cancelled in quick succession to the first most people would have gently panicked: Sarah Rowe practised a little self-hypnosis and neuro-linguistic programming and lo and behold was on one of the last flights home.

That was back in March, when Rowe had about 24 hours to get out of Melbourne before it went into full lockdown. She’d just finished her second season with Collingwood in the women’s Australian Football League as Irish Player of the Year, her debut season ending as the club’s Best First Year Player, in 2019.

Almost four months on and Rowe is still unclear about when or if she’ll get back to Collingwood, especially with Melbourne going back into lockdown on Tuesday in order to contain a fresh outbreak of coronavirus. Clearly not one to panic, she’s content to let things play out and practise some of the things she’s recently learned while also studying in Australia.

“The future is quite uncertain, still, for everyone,” says Rowe, via a Zoom call at her home in Ballina. “The [AFL] signing date is August 1st to 17th, so down the tracks a little. At the time you just deal with it. And there’s really been no conversation at the moment, until all the Covid-19 stuff recedes. I don’t think there will be any talk until the start of August. So until then I really don’t know, just taking it day by day, with the club, and then on to the county.

“We’ve been back training with the club [Kilmoremoy] in the last week, and everyone working from home, so it’s full commitment from all the girls, which is brilliant. And I’ve really enjoyed the precious time with the family, and it was nice as well to get the break from training, mentally and physically. I don’t think I’ve really had that ever.”

Which is no great exaggeration: Rowe turns 25 later this month, and has played inter-county football with Mayo since under-12, association football with the Republic of Ireland since under-15, and juggled her first two seasons in the women’s AFL while still representing Mayo at senior level.

It does appear certain, however, that those dual days are over, with Mayo women’s football manager Peter Leahy categorically stating it was “impossible”, and had to be one or the other for 2020 and beyond: again Rowe is happy to let that play out, come what may.

“We [Leahy and Rowe] haven’t had a one-on-one conversation. Travel is too uncertain, but I completely respect where he is coming from, and understand the position. We’ll see down the line. But I’ve known that was coming down the tracks, it was just out of respect for the other [Mayo] girls as well. It probably is getting more demanding, both ladies GAA and AFL, so there was always going to be a time when there had to be a decision made. At the end of the day, whatever is best for Mayo is best for me.

“My loyalty to Mayo has always been to the forefront, I adore Mayo, and want to play for Mayo until I can’t walk anymore. I can only speak for myself, but I’ve fully committed to Mayo.”

Rowe clearly won’t let any criticism of her time in the AFL get to her either, whether that’s from within the county, or from elsewhere: she combined her second season in Collingwood with a degree course in life coaching, hypnosis, and neuro-linguistic programming, which she readily admits has helped her cope on and off the field.

“It’s been great, such a good opportunity, from a self-learning, self-growth, all that kind of thing,” says Rowe, an ambassador for Lidl’s support of the latest phase of the 20x20 campaign, “No Proving. Just Moving”, designed to encourage women of all ages, abilities and backgrounds to get involved in exercise.

“Being in a professional environment, picking the brains of the elite athletes around you, I’ve learned so much about myself. I first went to a life coach about four years ago, was intrigued by that. It’s kind of sports psychology, but it’s anything and everything. She helped me how to think, and found that so beneficial to me, and the opportunity to study it came up in Australia, I paired the three things together.

“Hypnosis is a lot about habit change, for smokers, drinkers, that kind of the stuff. And you can also learn a lot about yourself, and it’s been brilliant. I feel like I’ve nearly unlocked a secret. I’m qualified, and I’ve started to take on some clients in the last three weeks, to get the best out of other people. In terms of hypnosis, in season, you might do some self-hypnosis, before you go to bed at night, and I find that works really good for me, in terms of mindset.”

While Mayo have been drawn against Armagh and Tyrone in the women’s postponed championship for 2020, those dates have yet to be confirmed; Kilmoremoy are also back in the senior club championship and that’s the focus for now.