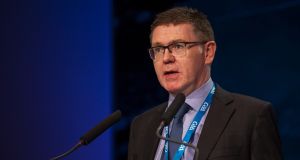 Tom Ryan: “If we need to put in measures, safeguards, protocols in around what is doing our business correctly, we will look at that and we will consider it then.” Photograph: Tom O’Hanlon/Inpho

It’s a familiar conflict in strange times. The tension between club and county has been part of the association fabric for a long time but it is now particularly noticeable, as clubs prepare for county championships and county managers seek access to the same players even though the GAA has forbidden intercounty training before September 14th.

At Friday’s media conference in Croke Park to launch further championship details, GAA officials were asked about whether counties in breach of the directive would face penalties.

“It is not for today,” said DG Tom Ryan. “What we are doing today is trying to set out a little bit of a picture for people of what the next three, four months can look like if we do our business correctly.

“If we need to put in measures, safeguards, protocols in around what is doing our business correctly, we will look at that and we will consider it then.”

There is strong anecdotal evidence that the lack of sanction in this regard is functioning like an incentive and in the crammed timetables, necessitated by Covid-19, major friction is being created between clubs and county teams.

Head of games administration Feargal McGill emphatically ruled out bringing forward the starting date for county training and rejected calls by the Gaelic Players Association to extend insurance to players outside of the approved window.

The reminder, after initial weeks of everyone being on the same page during the pandemic lockdown, that old problems are resurfacing came on a day when the intercounty game came back firmly into focus with championship draws in Munster and Leinster on Friday evening (see panel display).

The main bullet point from those was the meeting of Limerick, Munster winners last year and 2018 All-Ireland champions, and Clare in next October’s Munster quarter-final. The match will also be this year’s Allianz Hurling League final, as the counties topped Division 1A and 1B respectively.

McGill was also asked whether Friday night matches had been considered but he ruled out the prospect.

“For the very simple reason that we remain a volunteer association. If you have a game at 8 o’clock on a Friday, you are talking about teams getting together at one o’clock in the day. That’s a half day off work for those that have to work.

“Our volunteer stewards all around the country, they have got to be in place three or four hours beforehand and you would be depending on them getting off work.

“The practicalities are just not on. It’s nice to look at rugby and soccer and think it’s great that they can play on any day. It’s not practical in an amateur association.”

He was also asked about any progress on Government recommendations as to the crucial distinction between the categories of close and casual contacts.

“We haven’t received advice from the Government yet. There was a meeting of the expert group on returning to sport this morning; it was being discussed at that. If we don’t have advice by Monday we’ll be providing interim advice ourselves but it’s a huge question for all of sport, not just ourselves, and we need definition on that.”

With so little room for manoeuvre, there is a ruthless imperative to conclude rounds weekend by weekend. This means that the prospect – unthinkable in normal circumstances – of All-Irelands decided by shoot-outs is now very much part of the planning.