No surprise as TJ Reid emerges to claim Shefflin’s mantle 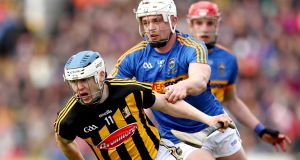 It’s only two years ago that TJ Reid balked at comparisons between himself and Henry Shefflin, his club mate and former Kilkenny colleague.

“I’ll never be Henry Shefflin, he’s the king of hurling,” said Reid at the time, though he would find it a much harder argument to make now.

Shefflin, admittedly, has three All-Ireland medals more than Reid’s seven and, at 30, time isn’t on Reid’s side to reel in his former mentor.

But in terms of pure influence on the teams they played on, there is very little to separate them. It could be argued Shefflin was surrounded by more iconic talents when at his prime than Reid has been for the last few years.

Without Reid in such stellar form throughout this spring, Kilkenny wouldn’t have burst from the pack as they did to claim an Allianz League title that few expected.

It was his genius, and to a lesser degree that of Walter Walsh, that bailed them out of a tight spot against Offaly in the quarter-final and he scored another 15 points in Sunday’s final win over Tipperary, bringing his overall tally to 1-81.

Eight-time All-Ireland winner Eoin Larkin played with both of the Ballyhale forwards for years with Kilkenny and is well-placed to assess Reid’s worth now.

“He is probably at a higher level than Shefflin was at [in his prime],” said Larkin. “They seem to have cemented TJ at centre-forward and built a team around him and you couldn’t argue with him in the form that he is in at the moment. I would just be worried that he is peaking too soon and I would hope that he doesn’t blow up halfway through the Leinster championship.”

It was Shefflin, ironically, that pulled Reid aside during the 2012 Championship and talked him into sticking around after he was dropped for the All-Ireland quarter-final win over Limerick. Reid listened and ended the season with another All-Ireland medal.

Larkin always saw the potential in Reid to develop into the player he is today.

“Absolutely I did, he can make the ball talk in fairness to him,” said Larkin.

“He has a great pair of hands and physically he is after maturing very well, he has all the attributes. As we have seen in the last few games, he is really the leader of the team now but I am sure that Brian Cody will be looking for others to step up too when he doesn’t have a good day, and that day will come as well.”

Interestingly, Reid and Andy Moran, the 2017 Footballer of the Year, both appear to have benefited hugely from the same sort of career change.

Both gave up jobs as sales reps to open their own gyms; Moran in 2015 in Castlebar and Reid in Kilkenny last year.

“The form TJ is in at the moment, there’s not many systems or players that are going to stop him,” said Larkin at the launch of the inaugural AIB GAA Club Player Awards.

“I think you just have to do your best on him and accept that he’s going to score a few points and move on.”

Praise from Larkin should be appreciated because he has offered sharp commentary of the team and his former colleagues since retiring.

Early last year, after a heavy defeat to Clare, Larkin questioned the attitude of the younger players in a Tweet, demanding that they ‘never give up’ and claiming that there were ‘too many standing around’.

“I’m not sure it had a positive impact or not but that is the way I was feeling at the time,” Larkin said. “It probably was a bit harsh on my part but coming from what I was coming from, watching that was somewhat disheartening.

The scale of the achievement this season, particularly after losing opening round games to Cork and Clare and in the absence of Paul Murphy, Colin Fennelly and Richie Hogan, has surprised Larkin.

“To be honest, I didn’t expect them to win the league final,” said the James Stephens club man. “I thought if they could come out of it with a respectable scoreline, then they could take it on the chin and move on and try to improve a bit for the championship.”