Life went on. Time didn’t stop. But all of Kilkenny had the sense of an ending

Henry Shefflin, the most decorated player in GAA history announces his retirement from inter county hurling at a packed press conference in Kilkenny where media were joined by family, friends and fans of the hurler. Video : Bryan O'Brien 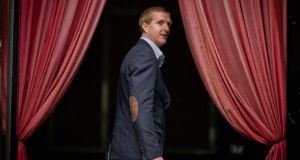 It is too early for him to absorb now, but in years to come Henry Shefflin might come to see his final week as a Kilkenny hurler as one of his most extraordinary.

Last September in Croke Park was his final appearance in Noreside stripes, but it didn’t end, it didn’t truly end until he appeared in the art deco theatre in Langton’s hotel yesterday to confirm what everybody already knew. Last week, he was back in Croke Park gilding a perfect season with Ballyhale Shamrocks. Two days of partying and the usual fugue state followed.

All week, ever since Ballyhale began to celebrate, he was entertaining a private debate and he had intimations. He called down to Brian Cody and tea and scones were had.

“We chatted more about hurling than anything else and he said to me that you are welcome back with open arms but it is your decision.”

The reasons to stay on were compelling but, as all through his hurling life, Shefflin responded to his instinct. On Sunday, he sat on the couch beside Deirdre, his wife, and together they watched Kilkenny and Clare produce sparks in a terse league game: those games were their food and drink for as long as he could remember.

“It wasn’t anything about the game itself. Saturday I was becoming more comfortable with it and come Sunday, then, I was looking at Kevin Kelly and Jonjo Farrell and saying: I remember when I started. So I felt it was time for myself. My heart was saying I would love to go back. I was looking in as a supporter more than, ‘that’s my team and I am going back to them’.”

On Monday, he told Brian Cody that he had decided. He was leaving: taking the leap back into mortal life. The conversation was warm, congratulatory, formal. “I think you know the answer to that,” he grinned when asked if the manager had become emotional.

No, histrionics and Oscar speeches are not Cody’s way, not Kilkenny’s way. But the manager still found the words that Shefflin quoted with no little pride in his voice.

“He was very complimentary to me and one of the nicest things he said to me, he said: ‘Henry, you got the best out of yourself’”.

And it’s a phrase that could read like his epitaph. Shefflin’s hurling story has been about perseverance as much as irrepressible talent, and there was always a sense that Kilkenny people appreciated him all the more for that.

Even after the meteor shower of awards and medals and superlatives which followed the first decade of his career, Shefflin carried himself with a kind of humility: he didn’t deflect from his increasingly exalted place in Irish sport and life but he carried it with easy grace, which is some feat. As Ned Quinn, the consigliore of Kilkenny hurling, put it: “Henry was the essential team player. He spoke with such heart, such fervour, indicating the wonderful pride he had in our county”.

The bountiful county reflected that back. And yet even yesterday at noon, normal life ploughed on away from the warm glow within the theatre at Langton’s. In Castlecomer, locals chatted on the street, walked to the shops, ran their errands. Kilkenny schools were in session – including Cody’s. In Kilkenny, the drinks suppliers ferried crates into the pubs. Time didn’t halt. Shefflin knew that it must not. When he spoke to Ned Quinn on Tuesday evening, he knew where the others were. He knew they were in Nowlan Park.

“I knew they were training. And I would have loved to be training.”

Most GAA players creep away with no fanfare. That couldn’t happen for a figure like Shefflin. Yesterday’s gathering was about handling the withdrawal of an incandescent figure from the Sundays that defined Kilkenny summers – and Irish summers. It was a salute.

Towards the end, someone asked him about his favourite moment and he returned to that September day against Galway when it appeared as if he simply decided that Kilkenny would not lose and, as Ned Quinn put it, “singlehandedly dragged Kilkenny back from the abyss of defeat”.

Shefflin said he had experienced the sort of epiphany which visits sports people maybe once or twice in a lifetime, and, for the first time all afternoon, he sounded truly solemn.

And, of course, he was and will be.

So Kilkenny train in Nowlan Park tonight and Henry Shefflin is no closer to nor further from it now than a 10-year-old passing by on his way to the shop and hearing the gallops of footsteps and Brian Cody’s instructions filling the sky.

That life for Henry Shefflin finished in Langton’s yesterday with his opening words:

“It is with a deep sense of gratitude and personal contentment that I am announcing today that I am . . .”