Between the Lines: Hurling’s revolution years always worth revisiting 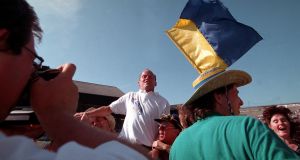 Clare manager Ger Loughnane celebrates with fans after the victory over Galway in the 1995 All-Ireland hurling semi-final. Photograph: Lorraine O’Sullivan/Inpho

Unlike students snapping up multiple revision books, striving to extract every ounce of inspiration ahead of those pesky State exams, sports hacks are spared a similar hit in the pocket as the hurling summer comes back into focus. For those on the GAA beat awaiting the new season to commence, Hurling: The Revolution Years is their vade mecum.

Of course, the page-turner penned by Denis Walsh in 2005 isn’t just for those chasing the action and deadlines. The award-winning rundown of the decade nobody saw coming provides even those with a passing interest in the game with the inside details on how the status quo was flipped and shook and flipped over again. It’s a portal to those halcyon days, when emotion trumped skill and skill trumped tradition, when the injection of some rather colourful characters into the game left the pre-eminent powers in a sudden state of flux.

It’s all in there. From the days of the subordinates’ perpetual underachievement during the early 1990s, to their subsequent rise, and then back to the re-emergence of the heavyweights again.

When the hurling scene demanded a change of scenery, the teams of the ’90s delivered in spades. The triumvirate of Kilkenny, Tipperary and Cork had a sticky hold on the Liam MacCarthy Cup before the upheaval began to take shape.

Offaly and Galway had won titles in the 1980s but their emergence as serious contenders wasn’t exactly seen as an upheaval. Their triumphs weren’t fatal blows to the aristocracy. The great powers were still knocking about, and hadn’t lost any of their fear-inducing aura. Prior to the ’80s, there were only brief flirtations with sustained glory outside the ‘Big Three’.

As Walsh lays out early in his book: “Hurling was a divided society where the rich got richer and the poor were patronised with pennies of encouragement and pats on the head.”

The eccentric characters of the ’90s were unwilling to step into line though, disrupting the landscape in a way that will remain etched in the memory of anyone lucky enough to have experienced the spectacles.

Impressively, Walsh squeezes the decade-long drama into just over 300 pages, not missing the highlights but placing far more emphasis on the behind-the-scenes moments, of which there are too many to retain from just a single reading.

There are images of Johnny Pikington holding court in an Ennis hotel, bellowing out Sweet Caroline to the congregation of beery team-mates, unfazed, it seemed, by the hammering they had just received in a challenge game versus Clare. The 2000 championship was due to start the following month. By the end of the summer, they were in an All-Ireland decider.

There are snapshots of Clare training camps at Crusheen and Shannon that made Royal Marine training seem as tame as garden croquet. And there’s Wexford watching the newly-released Braveheart en route to games, switching it off before the beheading of William Wallace for fear “such an image might transmit the wrong message”.

Every re-read provides yet another fascinating tidbit, hence the reason for so many returning to the pages with such regularity.

However, Walsh decided to begin the book at Thurles in 1992, at a game that was considered a rather meaningless affair in the grand scheme of things at the time. The fixture between Clare and Waterford ended in a draw, only attracting about 8,000 people. Fewer turned up for the replay.

“Clare won an All-Ireland three years later,” Walsh says now. “Waterford were a huge story in ’98 and for a few years after that.

“As time went on Clare and Waterford drew enormous crowds. They filled Thurles; they filled Croke Park. And I was wondering: where were they all that day?”

It was an entirely different game, played out against a tapestry that was dull and placid and increasingly predictable.

“A game between Clare and Waterford would be two traditional counties playing in the Munster championship and this was the scene.”

At the time, everyone was oblivious to the switch that had been flicked, to the tectonic movement that was ultimately coming their way. The encounter would prove to be a catalyst. A new era was emerging, hastened by an assortment of colourful characters not lacking in determination, Ger Loughnane being perhaps the agitator-in-chief.

Though Limerick’s Eamonn Cregan had returned Offaly to All Ireland glory in 1994, Clare under the Len Gaynor-Loughnane axis became a more spectacular rise, the former being the latter’s predecessor as Clare manager, with the fiery Clare man as selector.

When Loughnane took over and managed Clare to an All-Ireland title in 1995, their first title in 81 years, he did so without any array of winning experience to his name. Throughout his own career, he had lost 11 deciders at different levels of the game and he managed to rear not only a title-winning side but an era-defining group.

“I would give Clare by far the greatest portion of the credit for what happened,” says Walsh. “They had been downtrodden for so long and they had lost so many finals. They had this reputation for not being able to perform on the big day for decades.

“They hadn’t won a Munster title since the 1930s and they hadn’t won an All-Ireland since before that. For them to make the breakthrough, it really made it seem like anything is possible.”

The Clare outfit undoubtedly inspired other sides to rise up, but there was also “an element of coincidence” according to Walsh.

That three great sides – Offaly, Clare and Wexford – came along at the same time was a treat. But there were other participants in the revolution too, all of them playing a fundamental role in the movement, even if they failed to scale similar heights. Not every man can become an emperor. Messianic leaders like Loughnane and Liam Griffin, the Wexford manager at the time, only brought so much to the table.

Kerry added to the gushing unpredictability of the time to become a Division One team. Waterford emerged from decades of anonymity to make perhaps the most sustained effort at remaining one of the top sides in the country.

And then, there was a counter-revolution. By the time Walsh’s book hit the bookshelves, Cork had already bounced back from their years in the shadows to win back-to-back All Irelands. Kilkenny and Tipperary had won the other titles up from the grabs since the turn of the millennium.

The revolutionary period had been unable to build on the momentum, and the teams that had previously dominated began to resurface. In fact, the publication of the book coincided with the beginning of the all-conquering era that saw Kilkenny rush to the four-in-a-row in the latter part of the 2000s. It makes for a cautionary tale, especially after the past decade that has seen new counties emerge as re-energised forces.

Should lessons be learned, the ingredients may well be there to produce another era of romance. Though that’s obviously easier said than done.

“What also contributed to [the romance] was that teams were all trying to find their own way to do it,” says Walsh.

“People are so much informed now about what’s best practice. That kind of information is far more available. The top teams probably have key principles of preparation that probably wouldn’t be too divergent, or not nearly as divergent as what they were.

“Some of the training that Clare did under Mike McNamara worked for them at the time. Nobody would countenance that kind of training now. There’s a more homogenised approach now.

“There’s a lot more consensus about what best practice is. Back then, that consensus wasn’t there. Even though training is now going on behind closed doors and so forth, there probably isn’t a massive difference between what Limerick do and what the other counties do.

“Everybody is going in the same general direction. It’s not as if there’s a real contrast anymore.”

Even if the magic was short-lived, there’s no doubt those years left the game in a better place. Had the sport continued to potter along to the pattern it was exhibiting prior to the ’90s, decay and tedium would have inevitably seeped in.

The natural order resumed, but an element of the romance remained. It still does, to an extent. But can it ever reach the same levels of the past? It’s unlikely.

The Revolution Years set a high standard. They had it all – the skill, the scenes, the tales, the unadulterated magic.

At the end of a chapter dedicated to perhaps the two greatest players of the era – DJ Carey and Brian Whelahan – Walsh signs off in fitting fashion, though he may easily have been referring to the decade as a whole..

“They gave us their all and there’s no sign of us settling our debt,” he writes.