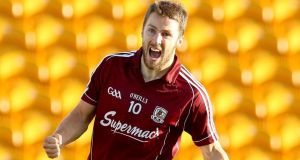 In the end this wasn’t quite the epic battle to make the All-Ireland football quarter-finals that the final scoreboard suggests, but one brief killing, Galway slowly then very suddenly breaking the initial resistance of a young Tipperary team.

Four goals – two each either side of half-time – swung the game irrevocably in Galway’s favour, and they move on to Croke Park for their All-Ireland quarter-final date on Sunday week, August 3rd, to be paired with Munster champions Kerry.

However, there was a late and spirited rally from Peter Creedon’s Tipp team, who struck back with four goals of their own, firstly from Brian Fox, then substitute Brian Mulvihall, and later still from Colin O’Riordan, and a late, late penalty from Conor Sweeney.

It certainly added respect to the scoreboard and no less than Tipp deserved given their summer to date, and yet Galway were still thoroughly deserving winners. Indeed, for Galway, who last made the quarter-final stage in 2008, it was a lively return to form after their somewhat muted defeat to Mayo in the Connacht final.

Fiontan O Curroin, Thomas Flynn, Danny Cummins and Michael Lundy struck the goals for Galway – and while Tipp did strike back later on, they needed some sooner rather than later to close down the deficit. It came too late, and Galway ran out comfortably, five-point winners.

Both teams started nervously with a series of wides, before beginning to exchange several points in quick succession – the sides level three times in the opening 15 minutes. Galway’s full forward line of Paul Conroy, Michael Martin and Cummins hit their first three scores, levelled out by two from Peter Acheson, and Sweeney’s free.

Tipp then opened a two-point gap with some typically bold scores from Steven O’Brien at midfield, and rising star O’Riordan. But again, Galway levelled up by the half hour mark, before hitting Tipp with two goals inside the last five minutes of the half, in both cases taking advantage of a turnover in possession that would cost Tipp dearly.

Midfielder O Curroin struck first, charging at the Tipp goal after a neat exchange of passes from Martin and Conroy brought the ball out of Tipp territory; then, fellow midfielder Flynn struck their second, Conroy involved again, with Martin providing the final pass on this occasion.

It left Tipp with something of a hill to climb at half time, trailing 2-7 to 0-7: that turned into a mountain shortly after the break, when Galway started the second half with two goals in two minutes, the first from Cummins, promptly followed by Lundy. Walsh immediately added a point from play, and with that Galway were effectively out of sight – 4-8 to 0-7.

Later, Tipp at least got the goals back, one by one, Fox bursting through from the right side of goal, and brilliantly finishing on 47 minutes for the first, but by then Galway had both feet in the quarter-final, and the hope and promise of giving Kerry a good contest.

Not even the three further goals could salvage Tipperary, and yet their pride remains intact after what was an impressive and enormously promising summer.