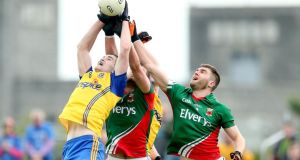 Native Americans consider thunder before combat a signal of luck. Some Roscommon folk might disagree. They heard thunder in the sky above Dr Hyde Park. They saw a thundering goal on the field. And still they lost the home battle to their old neighbourly enemy.

For Mayo it was definitely a case of being careful of what you wish for. Because after lamenting the lack of a proper test in the Connacht championship of 2013 – they beat Roscommon by 11 points in the corresponding fixture last summer – they were chasing down a three-point deficit here as the clocked passed the one hour mark.

What happened next may well help define the Mayo team of 2014. Freshly armed by substitutes Andy Moran and Alan Dillon, plus some rebellious forward play from Kevin McLoughlin, Séamus O’Shea and Cillian O’Connor, they hit the next five points without reply, and with that survived a madly exciting five minutes of injury time.

That was allowed after Roscommon’s Donie Shine was stretchered off earlier in the second half, although by then the player leading Roscommon’s way was under-21 star Diarmuid Murtagh.

Still Roscommon had their chances, even at the death, maybe not to win but certainly to draw, and with that send out a minor tremor across the entire championship.

That they came so close to a team expected to run rings around them suggests their summer possibly won’t end here, although for now a seventh championship successive defeat to Mayo can only represent a lost opportunity.

It was young Murtagh who pulled them back to within one point with a coolly struck injury-time free, having hit two brilliant points from play in succession midway through the second half. But at the very end, fellow substitute Finbar Cregg probably overplayed his run, affording Colm Boyle the chance to make the critical intervention, and that was that.

With five weeks now to prepare for another Connacht final, Mayo won’t be short of things to work on. Roscommon goalkeeper Darren O’Malley had no conspicuous saves to make all afternoon. At the other end, and after a couple of dangerous attacks earlier on, Roscommon eventually found a way into the Mayo net after 43 minutes when Ciarán Cafferkey broke loose left of goal, cruised into a scoring position, then unleashed an unstoppable shot to the right of Mayo goalkeeper Robert Hennelly.

It also brought to life all 15,873 in attendance after a first half dominated by Roscommon’s defensive tactics, and which included both the proverbial bus and blanket inside their own half. Indeed the first half couldn’t have been much tighter if the two teams played inside an empty bottle of wine.

Roscommon packed either 13 or 14 men behind the ball, with obvious consequences – as Mayo’s slick running game invariably ran down dead ends.

No wonder the teams went into the break only a point apart, Mayo 0-4 to 0-3 ahead.

There was hardly room to breathe on the field, let alone score, and while Roscommon opening their opening after five minutes, through Kevin Hughes, they didn’t score again for another half an hour, when Senan Kilbride broke off a tackle to score from play.

Donie Shine then added a beautifully struck point just before the break the reduce the gap to the minimum, Mayo’s first-half tally of four points coming from Jason Doherty and McLoughlin, and two frees from O’Connor.

If Mayo didn’t realise they were in a sticky contest by then, they did on 43 minutes, when Cafferky’s goal turned the game upside down, or at least from overly defensive to the purely offensive.

Then, as if on cue, Andy Moran was sprung from the bench, as was Dillon soon after – either one or the other of those players had not been out of the Mayo starting team in 12 years.

Moran’s introduction – for the younger O’Shea brother, Conor – was crucial, his two points in quick succession giving him and his team-mates the belief they needed. Dillon sliced one shot narrowly wide, but made his presence felt too, and another inspiring point from Séamus O’Shea in the 66th minute brought the teams level for the fifth team.

Then, Donal Vaughan drew a free that was deftly struck over the bar by O’Connor, before McLoughlin added another from play, thanks to the quick-thinking and quickly-taken free from Moran.