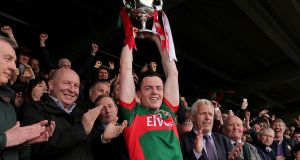 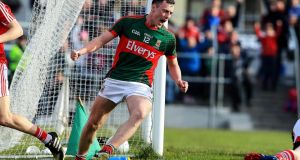 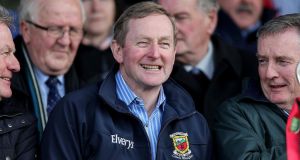 Mayo collected their fifth All-Ireland Under-21 football title amid a goal rush in front of a crowd of 7,467 at Cusack Park, Ennis on Saturday evening.

Their ability to score goals at crucial stages was central to their first success in 10 years, especially in a sensational climax, when the prospect of extra-time loomed large.

With the clock ticking down, Conor Loftus capitalised on a mis-directed short kick-out by goalkeeper Anthony Casey to slam in Mayo’s fourth goal two minutes from the end of regulation time.

And less than 60 seconds later a Morgan Lyons pass was flicked home by Liam Irwin for his second goal and there was no way back after that for the Munster champions.

In the first-half Mayo, who had the strong wind at their backs, seemed to be in trouble after Cork kicked five points without response in a glorious seven-minute spell to lead 0-7 to 0-4 after 26 minutes.

The game took a decisive swing in Mayo’s direction during an amazing three minutes of injury-time, when they scored a couple of quick-fire goals to turn the tie on its head.

Mayo struck in the first minute of added-on time, when wing back Shairoze Akram showed plenty of determination in winning a ball in the corner.

Michael Plunkett continued the move and lofted an inviting cross to the far post for Diarmuid O’Connor to fist home past goalkeeper Casey.

Mayo’s shooting up to that stage had been lamentable, registering nine wides in the half, but a well-struck free from Irwin reflected the growing change in their confidence.

And they capitalised fully on a mistake in the Cork half-back line in the closing act as Irwin fired home an unstoppable second goal from close range to somehow leave Mayo 2-5 to 0-7 in front at the interval.

Until those devastating couple of blows, Cork had more than coped with the Mayo threat and playing against the very strong wind despite falling 0-4 to 0-2 behind in the 18th minute.

Cork took over control with methodical use of the ball into a forward sector, where Peter Kelleher, Brian Coakley and Seán O’Donoghue caused problems.

Ryan Harkin started their impressive scoring surge with an O’Donoghue free and a couple of Coakley points in quick succession reflecting their dominance. Harkin completed the set to leave Cork well poised only for Mayo to stun them with those late goals.

A third goal in the 37th minute from a Loftus piledriver cancelled out Cork’s early sequence of points only for the game to take another twist, when Peter Kelleher punched home his side’s only goal entering the three-quarter stage.

And Cork must have sensed a major fightback after drawing level with a Brian Coakley free six minutes from the finish, 1-13 to 3-7, but Mayo’s goal-scoring abilities surfaced once more in a dramatic climax