Early start to new football season in Leinster and Ulster 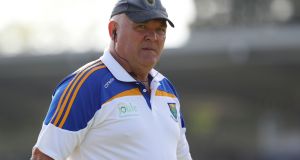 John Evans: “You would have thought that if it was being brought forward it would be to a few days after Christmas. Bringing it all the way to the 8th December seems a bit of an overreaction.” Photograph: Bryan Keane/Inpho

For everyone accustomed to a fairly quiet December on the inter-county front, this weekend comes as a bit of a shock.

On Saturday and Sunday, the 2019 season starts with fixtures in Leinster and Ulster, which will also mark the start of the trial period for the new football rules proposals.

“Wearing the player welfare hat, I would be strongly of the opinion that there shouldn’t be any inter-county games in December. I don’t think the provincial competitions should start until January.

“But then again it is easy for me to say that; I’m not trying to fit the competition into the window the provinces have to fit it into so we have to take that on board.”

Leinster vice chair Pat Teehan says that there was no intervention from the GAA in what is a matter of provincial administration but the council is aware of the views in head office.

“Counties wanted more of a break between matches. Last season’s O’Byrne Cup group fixtures were run off in little more than a week – 8th, 11th and 15th January. This time we’re playing them on the weekends of 8th and 15th December and 6th January. Semi-finals are due on the 12th or 13th and the final a week after that.

“It’s not set in stone and we’ll review it at the end of the competitions before deciding on next year.”

He says that the rescheduling hasn’t been influenced by the long-running saga of last season’s final, between Meath and Westmeath, which was eventually played in May because of the horrific weather early last spring and that the 2019 final is again fixed for the weekend before the national league is due to start.

John Evans is in charge of Wicklow, one of the counties in action on the first day, this Saturday away to Longford, and they have been back in training since 15th November. He feels that the season doesn’t have to start this early, describing the scheduling as “hitting the panic button”.

“You would have thought that if it was being brought forward it would be to a few days after Christmas. Bringing it all the way to the 8th December seems a bit of an overreaction, to be honest.”

In one way the move doesn’t represent a huge difference.

“Most counties would have been linking up with Sigerson Cup teams and having trial matches and when it’s non-competitive you can work away with it. Leinster Council is kind of calling that bluff, saying, ‘well, you’d be out playing anyway’.

“That’s not really true because competitive games, even O’Byrne Cups, are a lot different to challenges. They are allowing for unlimited substitutes so that alleviates the pressure a small bit.

“When you start with guys, they’ve all good intentions and can break down very easily and you’ve got a lot of injuries, initially. Newcomers [to county panels] can be overenthusiastic and want to prove themselves and as a result they don’t pace themselves properly, which can be a problem.”

The new rules are also in force and whereas Evans says that players are coping with the adaptation but that he is concerned for match officials.

“The feedback we get from inter-county referees is that they are finding it difficult and can’t take their eyes off the three consecutive passes and that it takes up a lot of their visual space. Players aren’t finding it too bad but they haven’t played competitively yet and I think you’ll find the problem for players in general is that they’ll get it right for 20 minutes but as the match goes on the focus is likely to lapse.”

Derry GAA have announced the retirement of county football stalwart Mark Lynch at the age of 32. He was during his career considered one of the most talented footballers in the game, playing centrefield or in the forwards and having won an All-Ireland minor medal at the age of 16 in 2002. He made his senior debut two years later and came on as a replacement in the 2004 All-Ireland semi-final defeat by Kerry.

In 2008, he was on the Derry team that beat the same opponents to win the NFL title. Championship success eluded him, and Derry featured in just one Ulster final during his career, the 2011 defeat by Donegal.