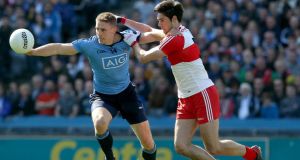 
Dublin’s power-spring concluded at Croke Park with the first of last year’s three major titles retained and by a daunting margin. The defeat of Derry in this year’s Allianz Football League Division One final also marked the first time in history that the county has won back-to-back leagues.

It equalled the record victory margin for a league final and that included a wandering concentration span in the second half, which saw 12 wides whistling past the posts at the Canal End.

All of that and the familiar, relentless pace and creation of scoring opportunities, many of which were converted with panache, plus the still-to-return under-21s – Jack McCaffrey, Cormac Costello and Paul Mannion – added to the perception of an exceptional team performing at a level that its rivals will do well to emulate in the coming months of the championship.

Seek out
Dublin’s style has been to attack with pace and relentlessly seek out the scoring opportunity. Conversion rates aren’t always economical but when you’ve knocked up 28 points and left 17 behind in wides there’s hardly time for the opposition to keep up with the scoring.

Bernard Brogan started his first match of the year and ended up the TG4 Man of the Match having shot 1-6. Three points were from play as was a goal rifled in with such violence in the 43rd minute that it cannoned back out off the stanchion.

He was well supported by his forward colleagues. Paul Flynn was again outstanding and if not everything Diarmuid Connolly tried worked, his ability – like Flynn’s – to win ball in the air and the immense work rate to track back and take possession in deep positions helped to maintain the insistent pressure that buckled Derry who sorely missed regular wing back Sean Leo McGoldrick.

Alan Brogan gave another industrious performance that showed how much his fully-fit presence has been missed in the past two years and at full forward Eoghan O’Gara showed once more what a phenomenal ball winner he has become, controlling it often with one hand and exerting huge pressure on Chrissy McKaigue, Derry’s man of the match in the semi-final win over Mayo.

What doesn’t kill you makes you stronger and Derry can chalk this down to experience. They’ve had a strong campaign in their first season back in the top flight but appeared apprehensive yesterday.

The plan was clearly to create congestion in the middle and make it difficult for Dublin to sweep forward. A two-man full-forward line of Emmett McGuckin and Cailean O’Boyle was intended to create space for them and problems for Rory O’Carroll and Philip McMahon.

It briefly worked. McGuckin got the better of O’Carroll and fisted the ball to O’Boyle and give Derry a fourth-minute lead 1-0 to 0-1. They didn’t however supplement this total for more than 20 minutes.

By then they were seven down. The congestion didn’t help Derry’s usually formidable centrefield and both Fergal Doherty and Patsy Bradley struggled to keep up with the mobility of their opponents Michael Macauley and Cian O’Sullivan.

The massed defence was gifting Dublin plenty of runway and the half backs were happy to make use of it. Jonny Cooper, as well as doing a good job shepherding Mark Lynch, Division One’s top scorer, effectively became a link man in attack so many opportunities did he get to carry into his own attack.

That possession – 58-42 according to TG4 after 25 minutes – and platform meant that Derry were inviting Dublin to see if they could create chances despite the bodies in the way.

Significant deficit
The winners responded with a succession of expertly taken points – Bernard Brogan from frees and play, O’Gara, Cooper himself, Flynn and a free from Cluxton – nearly had an early goal when James McCarthy ghosted through and their opponents weren’t configured to chase a significant deficit.

McGuckin had his successes in the tussle with O’Carroll but so did the All Star full back. The high point of the resistance came either side of half-time when Derry out-scored Dublin 0-4 to 0-1 but the deficit never shrank below five points and grew remorselessly as the winners reset their co-ordinates.

Gerard O’Kane got forward for points either side of half-time and Lynch grew into the contest, getting his first point when a fierce shot at goal flew over and seeing another attempt saved by Cluxton.

Bernard Brogan’s goal wiped away the brief Derry recovery and although the Ulster team battled away – losing corner back Oisin Duffy to a black card for a foul on O’Gara in the 51st minutes – and traded points almost equally Dublin’s goals expanded the margin. McManamon’s was a reward for perseverance – his shot at goal parried by goalkeeper Thomas Mallon, allowing him to hurtle in on the rebound to get a touch to the net for 2-17 to 1-8.

O’Kane had a shot cleared off the line by Nicky Devereux at the other end before Connolly added the grace note with an emphatic finish for Dublin’s third goal.

Stiffer challenges wait down the line but so far they’ve met each one.