GAA Statistics: The duel of the dead-ball specialists 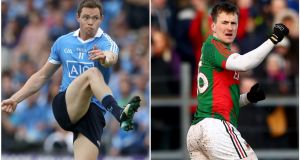 On Sunday week arguably the two best free-takers in Gaelic football will take to Croke Park for the All-Ireland final.

Dean Rock and Cillian O’Connor are so valuable to Dublin and Mayo that they are tasked with free-taking duties on the left, on the right, from close-in and from distance.

From a combined 76 dead ball efforts so far this summer, the duo have an 80 per cent success rate, from all those various angles and ranges. Nevertheless, they both do have their weaknesses.

Rock has struck an incredible 38 of his 41 efforts over the bar (93 per cent success rate) in Dublin’s five matches up to the final. A right-footed player, like O’Connor, he is also required to take frees from the right-hand side in the absence of a reliable citóg.

Rock’s relaxed style though allows him to fall back and lessen the angle – he has yet to miss a free from the right-hand side.

In contrast, O’Connor has struggled from the right. In the semi-final win over Tipperary he missed two of his three efforts from that side, and he allowed his brother Diarmuid a speculative crack at another. 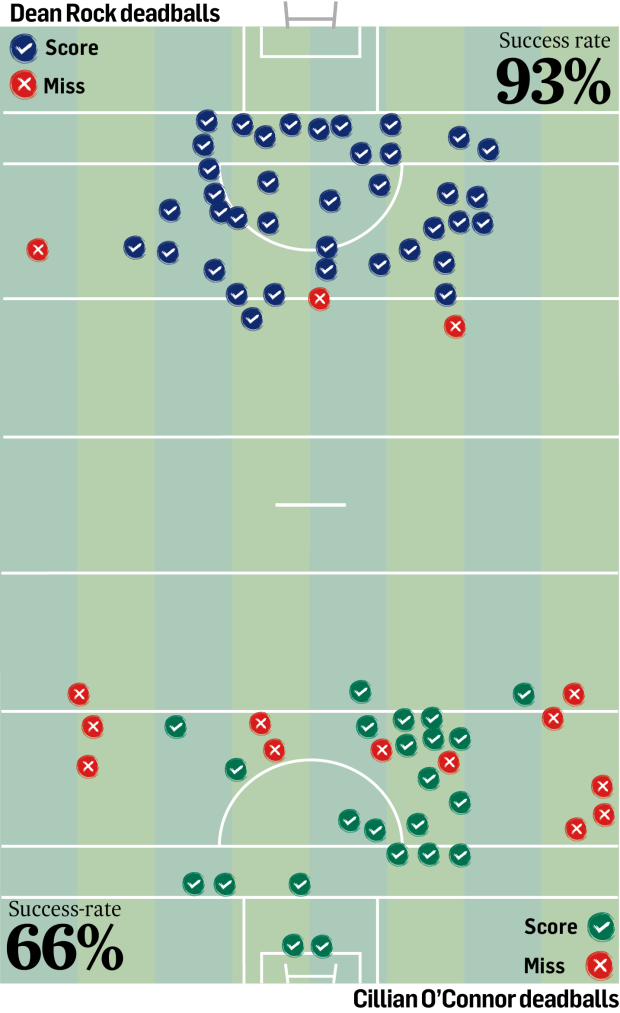 Despite still nailing a number of pressure kicks and some fine efforts from distance, O’Connor hasn’t been quite as dead-eyed of late as in recent years.

In seven games he has missed four frees from well within his range, as well as taking on a number of long-range efforts from beyond the 45 and the left sideline – of which he has missed five and scored four. Those are the sort of areas from which Rock and Dublin will more often than not avail of the short option.

Similarly, against Donegal in last summer’s quarter-final O’Connor’s adaptability proved his undoing. He converted just two of five attempts, missing two from the right and one from distance. However, he certainly proved his worth by scoring 15 of 16 attempts during the semi-final draw and replay against Dublin – standards he has yet to quite replicate in 2016.

Rock boasts a perfect record from both sides in the 2016 championship, within what would be considered his scoring range – his three misses were all from distance. And while he’s certainly able to generate power, particularly off the ground, he has struggled in the past with long-range frees.

Last year Rock’s impeccable free-taking form began to wane as the summer wore on – in the quarter-final, two semi-finals and final he had a ratio of 70 per cent. The Ballymun Kickhams sharpshooter missed all three of his long-range efforts in the drawn and replayed games against Mayo, which led to goalkeeper and captain Stephen Cluxton taking over those duties in the final. He scored just one of four attempts though.

This year Cluxton has not scored in the championship. In fact, he has taken only one free in the five games. This is in contrast to 2011 when he scored six points in the All-Ireland series, including the winner in the final against Kerry.

So far this summer, goalkeepers have accounted for only 0-17 – with just six ‘keepers mustering that total between them. In 2013 – perhaps the watermark campaign for what appears to be a dying trend – this tally was 30 per cent greater.

That year even Kerry had their goalkeeper getting in on the act with Brendan Kealy scoring in the Munster final. The two goalkeepers to score in the last eight were Cluxton and Mayo’s Rob Hennelly.

Yet with David Clarke pipping Hennelly to the number one jersey this summer, Mayo have lost their 45 and long range free taker. And with Cluxton seemingly no longer relied upon, none of the goalkeepers are likely to be surging (or strolling) up the field in the final. Unless perhaps to kill time.

Mayo have conceded an average of 0-7 per game from frees this summer, Dublin 0-5. Both teams will certainly be aware that despite the forecasted intensity, fouling in certain sectors on Sunday week will result in the concession of scores.

But on Rock and O’Connor’s side of things, it’ll be the conversion of those from their more uncomfortable angles and ranges which may prove decisive to who takes home Sam Maguire.