The other marching season: Terminalia, the Roman festival of boundaries

Frank McNally: Termons were places of sanctuary too, even for those fleeing justice 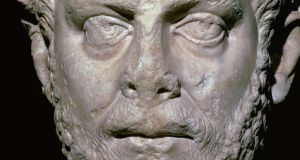 The Emperor Diocletian chose this date in 303AD to launch his great persecution of the Christians. Photograph: CM Dixon/Print Collector/Getty Images

Random as it sounds now, February 23rd used to mark the end of the year in Ancient Rome. Hence the festival of Terminalia, celebrated on this date, in honour of Terminus, the god of boundaries. Like most festivals, it involved eating, as neighbouring families met where their properties did and shared food. And of course blood was spilled too, from a sacrificed animal, and spattered along the demarcation line.

It seems to be mere coincidence that “march” is one of the several synonyms for “border” while also being the name of the month that followed February.

The former is from the same Germanic origins as “mark”. The latter came from Mars, the Roman god of war.

But the boundaries were doubly blurred on occasion. In The Decline and Fall of the Roman Empire, Edward Gibbon notes that the Emperor Diocletian chose this date in 303AD to launch his great persecution of the Christians. Whether the timing was “from accident or design”, Gibbon writes, the aim was to “set bounds on the progress of Christianity”.

Much violence followed, especially after the emperor’s palace was burned in reprisal. His vengeance included the scourging of a Christian holy man, who then had salt and vinegar poured in his wounds and was slowly “boiled” to death over a flame. Happy new year, how are you.

Getting back to land boundaries, in more recent times, the word “march” has tended to mean not so much a border line as a buffer zone between neighbouring realms. This also tended to imply a certain lawlessness in the area, or at least a very localised form of law.

There’s a region in Italy called Marches. But nearer home, one of the best known examples were the Welsh borders, where “marcher lords” once did as they pleased in return for paying homage and some taxes to the English kings.

There were marches between England and Scotland, too, and in Ireland during the early years of English rule. I don’t know if the term was still used in the era of Hugh O’Neill and Gaelic Ireland’s last stand. If it was, the Pale’s northern marches would have been near enough the modern-day Border, where to this day, the laws of either Dublin or London are still struggling to catch on.

A border case himself, poet Patrick Kavanagh used the territorial form of “march” in one of his most famous poems. Epic concerns a boundary dispute between two Inniskeen neighbours, one of whom – “old McCabe” – walks the line, declaring: “Here is the march along these iron stones”. Given the number of such rows in the area during Kavanagh’s time, the Roman god’s writ didn’t run there either.

The god of boundaries is, however, accidentally commemorated in several Irish place-names. Ironically, he has Christians to thank for it. The prefix Termon, in such towns as Termonfeckin, is from the same origin. It tends to coincide with river crossings or other transit points between neighbouring lands. These were once locations of monasteries or other religious establishments, which were exempt from secular taxes, but expected to provide free hospitality to travellers.

Termons were places of sanctuary too, even for those fleeing justice. This and the supposed powers of those who ran them meant that you disrespected the boundaries at your peril. A classic, if legendary, example is that of a sixth century King of Tara who, after one of his stewards was murdered, pursued the killer even into the precincts of a church of St Ruadhán, one of Ireland’s “Twelve Apostles”, where the fugitive had fled.

The monarch got his man, but Ruadhán responded with the infamous “Curse of Tara”, which predicted the destruction of the royal palace and the ruler’s death under a falling roof beam. To frustrate this end, the King is said to have had the roof beam taken down and thrown in the sea, to no avail,

Some busybody retrieved it and returned it to the hall, just in time for a big fire. There is a long and colourful account in which, fulfilling a different prophecy he had been given, the king first appeared to be dying instead from violent assault, drowning, and burning, all at the same time. But that was a mere distraction, and the saint was of course proved right. Before he could expire from anything else, the King lived to see the roof beam falling on him. Only then was he terminated.