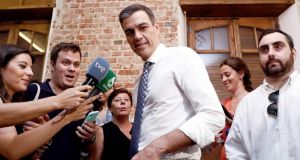 Last April’s elections looked like good news for the left in Spain, and for Spanish democracy, after years of crisis and instability in government.

At a moment when anti-democratic forces are on the rise across the world, and social democratic parties are in chronic decline, Spain seemed to be bucking both trends.

The election put the Socialist Party (PSOE) leader, Pedro Sánchez, in a position to form a potentially durable coalition with his more radical rivals on the left, Unidas Podemos, with passive support from Basque and Catalan nationalist parties.

True, this would require tricky negotiations. Spain has no experience of coalitions in its recent history, and the PSOE and Podemos had turbulent relations.

Podemos, offspring of the indignados anti-austerity movement, regards the PSOE with deep distrust, arguing quite convincingly that it puts the interests of the banks and big business before public welfare.

The PSOE, proud of social advances won through decades of pragmatism, sees Podemos as a ragbag of angry disaffection, manipulated by revolutionary intellectuals, exemplified by its leader, Pablo Iglesias.

Both parties also differ particularly strongly on the Catalan crisis.

Despite these obstacles, it was a reasonable assumption that they were condemned to find common ground. After all, they share a well-based fear that the entire Spanish right is reverting to its roots in the Franco dictatorship.

So it seems bizarre that, after sitting on his hands for an unforgiveable three months, Sánchez last week failed to win parliament’s support as prime minister. This pitches the country towards deeply unpopular new elections in November. And public frustration with the failure of the left parties to reach agreement opens the door to a government of the increasingly radicalised right.

Sánchez’s failure is all the more puzzling given his dynamic recent record. In 2016, he grabbed back control of his party from a sclerotic old guard, which had tried to destroy him. Last year, he upset all expectations by ousting Mariano Rajoy, veteran leader of the right-wing Partido Popular (PP), from the premiership, through a daring no-confidence motion.

Sánchez’s short-lived minority government made some progress, and Podemos gave him qualified support during this period.

In the April elections he won more substantially more seats than any other party, while the PP crashed to double figures for the first time.

The Catalan question has engendered a surge in militant Spanish nationalism. Coupled with cascading PP corruption scandals, this has splintered the party’s 35-year monopoly of the right. Its strongest new competitor, Ciudadanos (Cs), ran the old-style conservatives close.

Under normal circumstances, Cs might have been a viable alternative partner for the PSOE. However, its election campaign had focused entirely on seizing the leadership of the right, using rhetoric at times closer to the other new party, the unabashedly neo-fascist Vox, than to the PP.

Since these three right-wing parties fell well short of a majority, and had no friends across the chamber, the field was open to the PSOE and Podemos to do a deal. What went wrong?

Some blame can fairly be attributed to both parties. Each certainly treated the other more as enemies than as potential collaborators throughout the process.

The Podemos leader, Iglesias, who had surprised everyone by his exemplary, statesmanlike behaviour during the election debates, allowed himself to get rattled by the PSOE’s tough, even crude, negotiating tactics. He certainly lost control of the media narrative, appearing to be more anxious to secure a maximum number of ministries than to push through particular policies.

That said, it looks in retrospect as if Sánchez never wanted an agreement, and most responsibility for the debacle rests with the PSOE.

First, there was the extraordinary delay in opening serious negotiations, until days before last week’s investiture debate. It was natural that Sánchez waited a month, until local and European elections, already set for late May, indicated that the PSOE continued to regain ground, while Podemos fell back quite sharply.

But he then seems to have arrogantly assumed that Podemos would be glad of any crumbs he offered them. At first, he insisted that he wanted to govern alone, in the hope of securing a confidence and supply agreement.

When Podemos inevitably rejected this option, Sánchez said he would only accept independents sympathetic to Podemos as ministers, excluding all senior Podemos figures. He finally agreed to Podemos portfolios, as long as Iglesias was still excluded from government.

In a remarkably unselfish gesture, Iglesias accepted this offensive veto, but the real negotiations began so late, and the ministries offered were so insignificant, that Podemos probably had no option but to withdraw support. The atmosphere between the parties is now toxic.

Sánchez has since appealed to the PP and Cs to abstain, in a last-ditch investiture attempt set for September. That seems most unlikely. It may be that he has calculated all along that his best option is to attempt to improve his position in new elections.

That is a very long shot. Worse, it indicates the PSOE still wants to return to the old binary system in Spanish politics, where centre-left and centre-right alternately shared the spoils as the only options for government.

This is a sadly inadequate response to Spain’s now highly volatile electorate, and to the legitimate demands of those who have been immiserated by austerity policies.

Paddy Woodworth is a journalist and commentator on Spain and author of Dirty War, Clean Hands: ETA, the GAL and Spanish Democracy