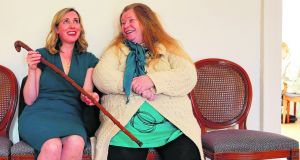 Ailbhe Ní Ghearbhuigh receiving Parnell’s walking stick from Nuala Ní Dhomhnaill in 2017. For decades, it has been proudly passed from one generation of Irish writers to the next. Photograph: Nick Bradshaw

A walking stick cut by Charles Stewart Parnell some 130 years ago is now used as a literary baton. For decades, it has been proudly passed from one generation of Irish writers to the next, with the Kerry-born poet Ailbhe Ní Ghearbhuigh being the current guardian.

Parnell cut the whitethorn stick from the wood in Avondale, Co Wicklow, where he lived in either 1889 or 1890. The first holder of the stick was the novelist and playwright Brinsley MacNamara. He is perhaps best remembered today as the author of The Valley of the Squinting Windows. The book has been described as “an uneasy fusion of a satiric portrait of gossipy, prying women and dipsomaniacally drinking men with a naturalistic tragedy”.

Unsurprisingly, the book, which was his debut novel, caused consternation when it was released in Ireland in 1918. Even though MacNamara used fictional names of individuals and places, the inhabitants of his home village thought that the characters depicted in the book bore an uncanny resemblance to themselves. The people of Delvin duly burned copies of the book in protest.

MacNamara seems to have received the stick from Victor Byrne, a collector and one-time proprietor of Avoca’s Fountain Bar. It was MacNamara who started the custom of passing it on to the next rising talent in the world of Irish letters. He gave it to the Belfast-born poet, WR (Bertie) Rodgers, who received it from him in a Dublin pub. Rodgers was brought up in a puritan household and was ordained as a Presbyterian minister before working as a scriptwriter and producer for the BBC.

In 1962, Rodgers passed the stick on to Conor Cruise O’Brien. At the time, O’Brien had written literary criticism and essays in a range of publications from the Bell to the New Statesman. He had also, fittingly, written a PhD thesis on the man who cut the walking stick, Charles Stewart Parnell, and his political party, the Irish Parliamentary Party.

Interestingly, O’Brien seems to have been the only holder to have used the stick for the purpose for which it was intended. He brought it on walks around the gorse-covered summit of Howth Head, where he lived at the time with his poet wife, Máire Mhac an tSaoi.

By that stage, Ní Dhomhnaill had been writing poetry for almost two decades, with her first collection, An Dealg Droighin, having been published in 1981. Since then, her work has been translated into many languages, including French, German, Polish, Italian, Norwegian, Estonian, Turkish, Japanese, and English. She is a member of the affiliation of creative artists, Aosdána.

The current holder of the stick is the Tralee-born poet, Ailbhe Ní Ghearbhuigh, who received it from Ní Dhomhnaill in May 2017. Ní Ghearbhuigh is a lecturer in modern Irish at University College Cork and was awarded the 2020 Lawrence O’Shaughnessy Award for Poetry. The prize, which was established at the University of St Thomas in St Paul, Minnesota, is named in honour of Lawrence O’Shaughnessy, a trustee and benefactor of the university.

The prize honours an outstanding Irish poet each year.

The list of past winners reads like a who’s who of Irish poetry, with Eavan Boland being the first awardee in 1997 for her collection Domestic Violence. Recent laureates include Katie Donovan in 2017 for Day of the Dead, Tony Curtis in 2018 for What Darkness Covers, and Patrick Deeley in 2019 for Groundswell.

It is not clear what Parnell would think about his plain walking stick being passed from one generation of writer to the next like a precious family heirloom. Although it seems appropriate that the stick has come to be used in this way. The Parnell family did have a connection to walking sticks.

There are also a number of walking sticks in private collections and museum collections around the world that claim to have been owned by the man himself or have some connection to him.

Many of these specimens are made of carved oak or blackthorn and are adorned with various embellishments such as ebony handles or silver mountings carved with the initials CSP. However, they cannot match the simplicity and honesty of the whitethorn one that Parnell himself cut from the woods in Wicklow all those years ago and around which a unique literary tradition has grown.