Fintan O’Toole: Budget might as well have been announced in a fairy fort in Leitrim

Financial plan is a tribal ritual, not a serious exercise in democratic scrutiny 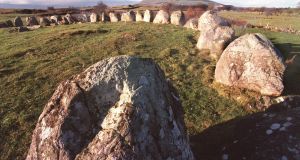 Let the shaman perform the rites of “unveiling the budget” (telling phrase that) and the other druids and elders deliver the magic words, do the ritual dances and holler the ritual shout of approbation. Photograph: Frank Miller

The Yanomami people of the Amazonian rain forest consume the rotted flesh of their dead in a banana soup. The Ainu people of Siberia sacrifice bears and drink their blood. In some parts of China, it is expected that a barefooted husband will carry his new bride across burning coals to the threshold. The Maasai people of Kenya spit on newborn babies and call them bad names to protect them from evil spirits. And in Ireland, we have the budget, a strange tribal ritual that seems terribly meaningful to those who participate in it but, like so many of these ancient customs, puzzles – even repels – outsiders.

In 2015, a team of anthropologists from the Organisation for Economic Cooperation and Development (OECD) penetrated darkest Dublin and studied the Irish budgetary process. The tone of their report is quite typical of modern anthropological studies: trying to be politely non-judgmental about quaint tribal practices but unable entirely to conceal their bafflement and revulsion. Behind its dry language is a scarcely contained incredulity.

One of the funniest OMG moments is when the OECD experts realise that the Irish parliament doesn’t appropriate money that the Government then spends – the sequence is actually the other way around. The money is appropriated after it has been spent. Needless to say, no other developed country does this: “the formal legislative appropriation of moneys for the budget year (via the Appropriation Act) does not take place until the very end of the budget year, after the money has been spent. This is different from practice throughout other OECD countries, where early or advance appropriation in law is the norm.”

The OECD pointed out certain other exotic elements of the Irish budget ritual. “The level of budget engagement by the Houses of the Oireachtas is the lowest observed in any OECD country.” The departmental estimates published alongside the budget are “too highly aggregated to allow for meaningful scrutiny by the Dáil and other stakeholders”.

No powers to change

“It can prove challenging for the chair to keep the committee discussion focused upon the scrutiny of the estimates, and the discussion may sometimes turn to constituency matters and general critiques of government policy . . .”

It would actually be more honest if the entire process were reduced to a single vote on the motion: “The Government will raise and spend money as it sees fit for the next 12 months.” But the ritual of scrutiny, like a half-blind shaman peering into the entrails of a goat and declaring the gods satisfied, seems to please everyone involved.

Or at least it did until the damned anthropologists got involved. The OECD report, published last autumn, made the ritual somewhat self-conscious. There was a degree of embarrassment and the promises to open up the budget process to proper scrutiny (themselves an indispensable part of the ritual) were renewed with protestations of sincerity. A new budgetary process is part of the programme for government, a cornerstone of the new politics. Yet here we are again , eating our ancestors in banana soup.

Last month, Alice Mary Higgins asked Enda Kenny in the Seanad “to outline how he sees the equality- and gender-proofing aspects of the budget being delivered, both in Budget 2017 and in the future. Will there be an equality statement to accompany the budget, as is the practice in Scotland?” The Taoiseach completely ignored the question because the answer is “wha’?” And if there is no advance analysis of the impact of the budget on the equality of citizens, TDs will vote on it without knowing what they’re actually doing. They might as well be spitting on a baby to ward off evil.

Tribes are attached to their rituals, to be sure. So perhaps we could move today’s ceremony to a suitable place like a fairy fort in Leitrim and let the shaman perform the rites of “unveiling the budget” (telling phrase that) and the other druids and elders deliver the magic words, do the ritual dances and holler the ritual shout of approbation.

And then we might have the parliamentary chamber free for a genuine, open process of working out how the people’s money can be spent with the best effects for most of the people. The main thing we should want to hear from the Budgte day shenanigans is that they will never happen again.