Northern nationalists look to be locked outside the gates of power 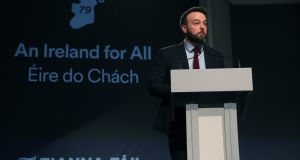 The SDLP is now scattered to the four winds. Its leader, Colum Eastwood joined Fianna Fáil leader Micheál Martin on stage at FF’s ardfheis last month, while former leader Mark Durkan raised some eyebrows by being unveiled during the week as a Fine Gael candidate for the Dublin constituency in the European Elections to represent, not Dublin, but Derry.

Taoiseach Leo Varadkar has suggested Durkan’s candidacy under the FG banner is partly about delivering on his promise of December 2017 that northern nationalists “will never again be left behind by an Irish government” .

Varadkar’s claim might be taken with a grain of salt given that Durkan’s candidacy is likely to be as much about stealing a march on FF as it is about the welfare of northern nationalists. Are current and former SDLP members merely useful pawns in southern political one-upmanship?

The 'Labour' dimension to the SDLP has been problematic for decades

As the Labour Party sees it, there is another dimension to this. It is not a receptacle for the SDLP exiles, despite the Labour dimension to its title. Labour’s Dublin candidate in the European elections, Alex White, has insisted: “The saddest aspect of it all is the fact that, having worked within the Party of European Socialists throughout his career, Mark Durkan has now signed up to the conservative European People’s Party – a group that offers a very different vision for Europe than the Party of European Socialists. As we look forward to these elections, it is clear that the true candidate for social democracy – for a social democratic and labour party – will not be the Fine Gael candidate, nor indeed the Fianna Fáil candidate, despite their recent alliance with the SDLP. It will be the Labour candidate.”

In truth, however, the “Labour” dimension to the SDLP has been problematic for decades. One of the reasons the SDLP’s first leader, Gerry Fitt – who insisted on the inclusion of the word Labour in its title– parted ways with the party in 1979 was because he believed it had become too “republican” and he regarded himself as representing the “voice of concern”.

Fitt went much further in June 1987 in reacting to what he regarded as the party’s desire to see Thatcher returned as British prime minister: “The SDLP were only admitted to the Socialist International by my credentials. Now their support for a reactionary government brands them as class traitors.”

But there was something ironic in that assertion: by that stage Fitt had accepted a life peerage, sitting in the House of Lords as Baron Fitt of Bell’s Hill and was derided by many Irish nationalists and socialists as a result. He comforted himself in the Westminster social club; an exile, who, with his family, had suffered considerably.

Because of the leadership vacuum, legislation dealing with £17 billion of public funding for NI was passed in less than four hours in a near-empty House of Commons

The history of the SDLP is a reminder, not only of its pivotal role in the peace process, but also of its internal divisions, and the extent to which it has frequently had to seek solace and relevance away from home including in London, Dublin and Washington.

A divided SDLP is now, it seems, a political flower withered beyond recovery, but the scattering of its petals is just one manifestation of weakened northern political muscle. Sinn Féin has also struggled in recent times to carve out a distinct space in the Brexit drama and has been left reacting rather than initiating.

It is easy to see the stark reminder of the head of the civil service in Northern Ireland, David Stirling, during the week about the “grave” consequences for NI of a no-deal Brexit (with the potential for “profound and long-lasting impact on society”) as a reprimand to the DUP, and in some respects it was. SF’s Michelle O’Neill reacted quickly by describing it as a warning “that again underlined the recklessness of the DUP”. But the complaints of SF are also a reminder of a wider recklessness and lack of leadership in NI of which SF bears part responsibility at the very time when that leadership is needed most.

Because of that leadership vacuum, legislation dealing with £17 billion of public funding for NI was passed in less than four hours in a near-empty House of Commons on Tuesday with not enough scrutiny or oversight.

Lack of scrutiny is also facilitating other abuses: last month, DUP MP Jim Shannon asserted in the Commons that, “A recent national opinion poll in Northern Ireland showed that 60 per cent of those polled were clearly against the backstop – a majority of opinion.” This was completely erroneous; no opinion poll has found any such thing but, in the current power vacuum, the DUP is getting away with this nonsense without fear of contradiction either at Westminster or Stormont.

Karen Bradley’s foolish, inaccurate and offensive remarks on killings during the Troubles by soldiers and police also provoked a strong reaction from northern nationalist politicians this week, but again, from outside the gates of power, where they look destined to remain.

1 Son putting elderly dad under pressure to sign over land
2 Covid-19: Museums, cinemas set to reopen next week as Varadkar warns of New Year restrictions
3 Irish tax policy is now a human rights issue for the UN
4 Alison Curtis: My guilt at not going for a second pregnancy
5 Stir-crazy Dutch holidaymakers set to descend on Caribbean island
Real news has value SUBSCRIBE