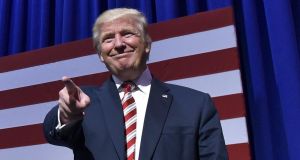 Some put Irish attacks on Trump down to principle. Others might see them as cheap-shots, and partisan interference in another country’s election that they thought Trump was sure to lose. Photograph: Mandel Ngan/AFP/Getty Images

It is a farrago of accusation, fact, defamation and innuendo. Donald Trump’s attack on Irish billionaire Denis O’Brien is chiefly an attempt to smear Hillary Clinton, by association.

But Trump’s attack on O’Brien also highlights the actions and inaction of successive Irish governments. And in a second of his string of “Follow The Money” messages on Wednesday night. Trump identified the Irish government, through Irish Aid, as one of the Clinton Foundation’s biggest financial backers among international states.

This attack may not be deliberate Trump payback for overt political assaults on him by senior politicians in the Dáil this year, but it should be enough to worry Irish voters. With the EU going after tax breaks for US jobs here, we do not need a pissed-off president in the White House.

Remember when many people were still laughing at the idea that Trump could be president? That was just four months ago. In late May, Trump proposed stopping in Ireland to visit his Doonbeg golf links and to meet with some politicians. It was seen as another effort to court the Irish-American vote, which Irish politicians usually welcome. They didn’t welcome Trump, so he cancelled.

“If Trump’s comments are racist and dangerous, which they are, there is an alternative for Americans to vote for,” Taoiseach Enda Kenny said. His Minister for Social Protection Leo Varadkar described comments by Trump as “sexist” and “misogynist”.

“It is not acceptable for democrats to speak in the way Donald Trump has spoken about various religions and ethnic groups and about building walls. It sets an appalling example for how the free world should speak and articulate,” was the view of Fianna Fáil’s Micheál Martin.

Some put these attacks on Trump down to principle. Others might see them as cheap-shots, and partisan interference in another country’s election that they thought Trump was sure to lose. Maybe they recklessly backed the wrong horse.

Denis O’Brien could sue Trump for libel. He would be less likely to win in America than in Europe. Trump’s statement itself accuses O’Brien of attempting to silence politicians and journalists who criticise him, quoting one US report that “O’Brien has previously injuncted or initiated defamation proceedings 24 times against 42 media outlets”.

Mr O’Brien is perfectly entitled in law to sue for defamation if he wishes. But the Government can hardly sue. Yet Trump’s attack shames Ireland.

The candidate refers to damning findings of the Moriarty Tribunal inquiry into payments to politicians, including Michael Lowry. In doing so Trump raises issues that will not go away but that have never been resolved by either the government or by O’Brien. And he does so on an international stage where Ireland’s arrangements with some multinationals are already a cause for scandal.

The headlines on the Trump statement are shockingly direct, and present Irish media with questions of liability for defamation if repeated here. American libel law is much more permissive than that of either Ireland or Britain.

Trump has constructed his 3,500 word attack on O’Brien and Clinton by relying largely on quotations from published sources. These include The Irish Times, the Guardian, the Sunday Independent, Village, Forbes, and US websites Irish Central and The Daily Beast.

Noting that, as of April last, Denis O’Brien is worth more than $6 billion (€5.3bn), Trump describes him as Bill Clinton’s “friend”. Trump says that, “In 2011, O’Brien Flew Bill Clinton To Ireland On His Private Jet So That Clinton Could Speak At The Global Irish Economic Forum.” There was nothing illegal about doing that of course. But how does that look now for Hillary Clinton, desperate to paint Trump as unprincipled? And for Ireland?

It is not just some Irish politicians who often appear to be honorary members of the Democratic Party in the next parish. Too much of our media is informed by perspectives and reports that fail to convey to the Irish public how many Americans outside New York or Boston really feel. If O’Brien had feted Trump, and if Hillary Clinton was now making this attack, it might have been a lot higher up the RTÉ news agenda this morning.

The “dumb redneck” cliche does not explain why so many Americans are unable to relate to a candidate such as Hillary Clinton. I hope that she wins, but know the US well enough to understand why too many of its citizens are tempted to give Trump a try, and it’s not about bigotry.

Now, even before Trump may be elected president of the US, this Irish Government needs to backtrack rapidly and to make it clear that it is as happy to work with Trump as with Clinton if Americans in November puts him in the White House.

1 Thirteen further deaths and 1,269 new cases of Covid-19 recorded in the Republic
2 Level 5: Fines for house parties and breaching 5km rule, while permitted funeral attendance up to 25
3 Government planned to extend sweeping pandemic powers with 45-minute debate
4 One hundred Irish retailers for all your online Christmas shopping
5 Support bubbles: Everything you need to know
Real news has value SUBSCRIBE