Benedict Kiely memorably portrays travelling across the US in the 1960s

He captured the changing face of the country, through Irish eyes 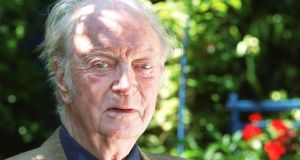 The turbulent country into which Ben Kiely was born on August 15th, 1919, was embroiled in a War of Independence which had started in January that year.

Although Dromore in Co Tyrone was his birthplace, Kiely grew up in Omagh and became a renowned novelist, journalist and broadcaster.

He was known for what John Montague called the “rich, reverberating tones of his great organ voice” on RTÉ’s Sunday Miscellany, which helped make him a household name.

Less well-known is the period in the mid-1960s when he spent terms as writer-in-residence in different parts of the US.

From September 1964 he was based at Hollins College, Virginia, and the following year he served as visiting professor in creative writing at the University of Oregon in Portland. In 1966 he was appointed writer-in-residence at Emory University, Atlanta, Georgia, returning to Ireland in 1968.

America presented Kiely with a golden opportunity to travel around, charting life in different states, taking in new landscapes and cityscapes and meeting the people, as well as helping develop his students’ writing skills.

From New England, through the midwest and deep south and across to the west coast, he lectured and taught widely, perceptively capturing the changing face of the country.

He was especially active for The Irish Times, contributing a “Letter from America” which appeared regularly, a substantial production of up to 2,500 words.

Travel writing is an open-ended genre, with wide parameters and enormous elasticity, and the place comes alive in his letters.

He kept notebooks and scraps of paper as aides-memoires and was constantly alert to the numerous anecdotes, stories and obiter dicta that enliven his dispatches.

Even though he was 3,000 miles away and an ocean separated him, Ireland played a part in his writing, becoming a leitmotif.

But his main focus was on America and he memorably portrays arriving in Chicago in April 1967 where the landscape changes from a dead cornland to an industrial city: “Here’s a high overhead freeway and a shanty town below: a clover leaf with demented, spinning traffic: puffs of industrial smoke, white, brown, black and grey, increasing in number until it would seem as if the earth was erupting; and a million railtracks and a million parallel rows of housing: and Lake Calumet Harbour and a prospect of desolation, brown marsh, brick rubble, three tall red-and-white chimneys, a huge billboard from which a moustachioed old-timer offers you the gasoline that won the west.”

He connects the scene to an Irish Times colleague, Mary Maher, who was born in Chicago, and ends with a self-deprecating comment: “But far ahead there are soaring buildings and a flying suspension bridge that glistens, and over there is Chicago and the lake: Mary Maher Country, where it behoves a spalpeen like myself to walk with respect.”

Kiely adopted a travel reportage style, recording his impressions and filling his features with the unpredictability of human nature.

His sojourn gave him the opportunity to write about subjects as diverse as Basque sheep herders who drank wine from a goatskin pouch in Oregon, the Mormon buildings of Salt Lake City, the Cherokee Indians, or wandering in Atlanta amongst the skyscrapers: “It is not so much an ordinary city as a shapeless giant of a suburb that began to grow, as if when asleep, in a forest whose limbs sprawl here and there and everywhere in the shade of timber.”

The eccentricities of Americans appealed to Kiely. He loved the quirky side of Californian life where he discovered in San Francisco a JM Synge play being performed in Chinatown, while at the Playhouse on Fisherman’s Wharf he was delighted to see posters for Brendan Behan’s The Hostage.

In Georgia he listened to a young fundamentalist preacher named Ian Paisley (from his native county of Tyrone) speaking at a Baptist tabernacle.

Public transport, he wrote, was “cheap, efficient and comfortable and the best place to casually meet the plain people of America”.

Entire days were spent on a Greyhound bus when “27 hours of travail” brought him from Des Moines, Iowa, by way of Nebraska and Wyoming into Utah.

He enjoyed the transcontinental train service, the Domeliner, where several carriages had a second storey capped by a glass dome and was somewhere to sit like a king watching the world swim by: “Two freight trains placed end to end would equal the entire CIÉ empire. This dome I sit in is a fit tower for a poet and I would like to see Patrick Kavanagh here because I know that his high and simple mind would appreciate the wonder of it. It would also keep him from destroying his poems by growling about the neighbours, the dacent townies from the County Tyrone.”

To mark the centenary of his birth, a festschrift, In a Harbour Green: Celebrating Benedict Kiely, edited by George O’Brien, is published by Irish Academic Press.

1 Late Late Toy Show duet with musical hero ‘absolutely mad’ says delighted teen
2 Ireland’s teenage pariahs: ‘We are really at breaking point now’
3 Michael J Fox: ‘In the wheelchair, I’m luggage. No one listens to luggage’
4 Waterford turn Kilkenny upside down and inside out
5 Basic income for all: Has the Covid crisis given us a new economic model?
Real news has value SUBSCRIBE