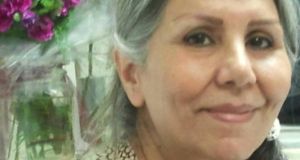 Mahvash Sabet: her faith is considered a “deviant sect” in Iran. Photograph: Pen

The international writers’ association Pen marks its 33rd annual Day of the Imprisoned Writer today with appeals on behalf of five writers, from Cameroon, China, Iran, Kyrgyzstan and Paraguay.

Of 900 writers who were harassed, imprisoned, murdered or “disappeared” worldwide last year, Pen says 283 were imprisoned and 33 were killed.

Mahvash Sabet, a 62-year- old Iranian teacher, is among the five chosen by Pen. She is unusual because she is not a professional writer. “Sabet was imprisoned because of her faith, not her writing, but she has been writing this wonderful poetry since she’s been in prison,” says Ann Harrison, director of the Writers in Prison Committee at Pen.

Founded in 1921, Pen originally stood for Poets, Essayists and Novelists, but has been broadened to include journalists and bloggers.

“Poetry is very dear to a large part of our membership,” Ms Harrison says. “We can use this literature to highlight human rights violations.”

In her poem Lights Out, Sabet describes the sounds made by fellow prisoners at night. “You can’t see the sorrow after lights out./I long for the dark, the total black-out.”

Sabet is from the Baha’i faith. Considered a “deviant sect” in Iran, the Baha’is have been targeted by a “systematic campaign of government repression since the 1980s”, says Human Rights Watch. At least 734 Baha’is have been arrested in the past decade, and 136 are still imprisoned, according to the UN special rapporteur on human rights in Iran.

Sabet and six other leading Baha’is were detained in 2008. They were initially charged with spying for Israel, “insulting religious sanctities and propaganda against the Islamic Republic”. More charges were added later, and all seven have received 20-year prison sentences.

Pen joined the international campaign on behalf of human rights lawyer Nasrin Sotoudeh, who was freed last year. In Tehran last June, Ms Sotoudeh told me that she and Sabet had become close friends in ward 209 of Evin prison.

The Perfume of Poetry

Sabet “doesn’t write about her own pain”, Nakhjavani says. “There are prison portraits of the women held with her. She uses poetry to bear witness to the dignity and pain of the others.” Sabet’s “incredible hope” is the other striking feature of her work, Nakhjavani continues. “She has this Mandela or Gandhi-like certitude, an absolute assurance in her heart that this will pass, that there is going to be a resolution because the human spirit is too strong to be crushed.”

Pen asks supporters to send appeals to Ayatollah Ali Khamenei, supreme leader of the Islamic Republic. Khamenei is considered the regime’s chief hardliner. “But he is the person with power,” says Ms Harrison. “If he decided it was in Iran’s interest to let a particular prisoner go, he’s the one who could make it happen.”