US investigators examine whether Nashville bomber had 5G paranoia

FBI has not named a suspect, but searched the home of an IT consultant in city suburb 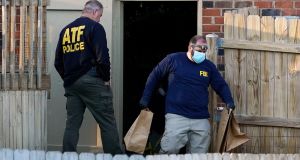 Investigators remove items from the basement of a home in Nashville. Photograph: Mark Humphrey/AP Photo

Investigators are reportedly examining whether a suicide bomber with a fear of 5G technology could be behind a Christmas morning explosion in Nashville’s historic city centre that injured three people.

The blast, which caused extensive damage to dozens of buildings in Tennessee’s biggest city, took place outside a facility owned by the telecommunications company AT&T and knocked out or impaired mobile phone services in several other cities.

Federal agents spent the weekend looking into a 63-year-old man who owned an RV motorhome similar to the one detectives believe was turned into a mobile bomb and driven to the scene.

Meanwhile, a Nashville television news channel reported that a person of interest, named as Anthony Warner from a southeastern suburb of the city, worked as an information technology consultant for a property company.

Steve Fridrich, a real estate agent who contacted the FBI after hearing the man’s name on a news bulletin, told WSMV TV that federal agents had asked him if Mr Warner had a paranoia about 5G technology.

According to WSMV, sources close to the investigation have said that among the various tips and lines of inquiry was one that suggested Mr Warner bought into a conspiracy theory that 5G technology was being used to spy on Americans.

The FBI has not named a suspect, but searched Mr Warner’s home in the Nashville suburb of Antioch after the bomb squad cleared the property. Earlier, a spokesperson said that human remains were retrieved from the site of the explosion, and that the agency was not actively looking for any more suspects.

DNA results on the human tissue were expected shortly.

Douglas Korneski, the special agent in charge of the FBI’s Memphis field office, said that hundreds of agents were sifting through at least 500 tips and leads, and that it was too soon to focus on any particular theory.

“It’s just going to take us some time,” he said at a Saturday evening press conference. “We’re looking at every possible motive [and] our investigative team is turning over every stone.”

Asked whether the AT&T building could have been a possible target, Mr Korneski said, “We’re looking at every possible motive that could be involved.”

On Sunday the mayor of Nashville appeared to indicate that the 5G conspiracy theory could be relevant to the investigation. “To all of us locally, it feels like there has to be some connection with the AT&T facility and the site of the bombing,” John Cooper said on CBS’s Face the Nation. “That’s just local insight, because it’s got to have something to do with the infrastructure.”

Mr Cooper has been liaising closely with federal and local law enforcement agencies conducting the investigation, and also the Republican Tennessee governor Bill Lee, who has asked President Donald Trump for a federal disaster declaration.

The blast occurred early on Christmas morning as police officers, called to the scene by reports of gunshots, attempted to evacuate local residents. A sinister recording blaring from the RV featuring a woman’s voice, interspersed with snippets of music, warned an explosion was imminent.

Civil and emergency communications networks in Nashville and several other cities, including Louisville, Knoxville, Birmingham and Atlanta, were affected. – Guardian