Republican distaste for Obamacare at heart of battle as the US government begins a partial shutdown for the first time in 17 years on Tuesday. 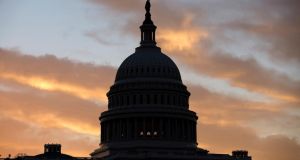 The US Capitol in Washington, DC ahead of the US government getting set for its first partial shutdown in 17 years at midnight US time last night. Photograph: Joshua Roberts/Bloomberg

The US government began to shut down last night for the first time in 17 years as Democrats and Republicans failed to agree a budget in a bitter row over President Obama’s signature healthcare law.

In a sharply divided US Congress, the Democrat-led Senate and Republican-led House of Representatives failed to find common ground on a budget deal as a flurry of last-minute proposals passed between the two branches of America’s government failed to avert the shutdown.

The political stalemate means that about 800,000 government workers will be put on unpaid leave today, while federal offices, national parks, monuments and museums across the country will be closed.

Tens of thousands of air-traffic controllers, prison guards and border patrol agents will have to serve without the prospect of being paid.

Just hours before the government fiscal year ended at midnight, House Republicans proposed a third temporary budget deal in two weeks tied to a delay to the rolling out of the Affordable Care Act, Mr Obama’s healthcare law that gives health insurance cover to millions of Americans.

Senate Democrats voted the proposal down, after rejecting a similar bill earlier yesterday, making a shutdown inevitable as both sides failed to agree a deal without Obamacare being affected.

After the series of bills were sent up from the House and rejected by the Senate, the House took steps to open discussions with the Senate, but the leading Democratic senator refused to entertain them.

Harry Reid, the Senate majority leader, said he would not open talks with House leaders ahead of the shutdown “with a gun to our heads” and demanded that the House first pass a six-week budget.

The House declined, seeking to reach an agreement through negotiations directly with the Senate and triggering a shutdown as a midnight deadline passed.

After the Senate voted down the House bill, Reid blamed Republicans for the suspension of non-essential of government services.

“It will be a Republican government shutdown, pure and simple,” he said.”

This is the first government shutdown since Bill Clinton was president in 1996 when federal services were suspended for a record 21 days.

Mr Obama has previously battled with House Republicans on budgetary matters, in 2011 and again over the New Year, but each time managed to avoid a government shutdown.

The US president blamed House Republicans again for the failure to agree in a message posted on the social media website Twitter, posted shortly after midnight.

“They actually did it,” he said. “A group of Republicans in the House just forced a government shutdown over Obamacare instead of passing a real budget.”

In a direct snub to the party, the president sent out two more messages, saying that his administration would be pressing ahead with plans today to start the roll-out of Obamacare to uninsured Americans, a move that Republicans claim will lead to job losses.

Shortly before midnight, the White House issued a notice to federal agencies to “execute plans for an orderly shutdown due to the absence of appropriations.”

The president signed an eleventh-hour bill – passed by Congress – that ensures members of the US military will continue to be paid.

The White House broadcast a televised personal message from the president to the US armed forces, informing them that the government would continue issuing their paychecks.

Earlier yesterday President Obama warned that a shutdown would have “a very real economic impact on real people, right away” and “throw a wrench” in the US economic recovery.

“The idea of putting the American people’s hard-earned progress at risk is the height of irresponsibility, and it doesn’t have to happen,” he said.

He criticised a faction of House Republicans, saying that keeping the people’s government was “not a concession to me.” He accused them of trying to “re-fight the results of an election.”

Speaker of the House of Representatives, John Boehner, the most senior ranking Republican in the chamber, said he wants the Senate to agree to a conference to negotiate a deal on a short-term budget.