US election facts that may surprise

Turnout was not low, opinion polls were not far out and Clinton’s popular vote lead is growing 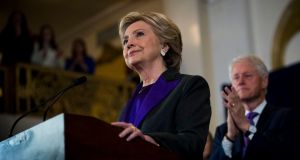 Hillary Clinton’s lead in the popular vote is only going to grow as counting of votes in the US presidential election continues. Photograph: Doug Mills/New York Times

The US presidential election has given rise to a wide range of responses and opinions. But some aspects of it are rooted in fact – not open to interpretation. Here, we present a compendium of sorts about the election. Some of these may seem basic, but they are by no means obvious to everyone.

Hillary Clinton won the popular vote, and that lead is only going to grow. The New York Times called the election for Donald Trump at about 2.40am eastern time on November 9th. At that time, he had about 57.2 million votes, almost one million more than Hillary Clinton. Even before then, the signs pointed to her edge in the national popular vote.

Most of the votes that remain uncounted are in heavily Democratic places such as California. Even roughly two weeks later, the state estimated that it had about two million ballots yet to be counted, including about 760,000 in Los Angeles County, where voters have preferred Clinton by about 50 percentage points.

As the votes have trickled in, the popular vote has tilted toward Clinton. As of Wednesday morning, that lead surpassed two million votes, or 1.5 percentage points better than Trump. (Our time-stamped estimates are courtesy of Dave Wasserman’s excellent popular vote tracker.) This lead is still growing, but it’s already a larger margin than in popular vote victories by Al Gore in 2000, Richard Nixon in 1968 and John F Kennedy in 1960.

Turnout in the 2016 election was not low. It is about the same as it was in 2012 and comparable to most 20th-century presidential elections. Turnout is simple to calculate: Take the total number of votes cast and divide it by the total number of adults who are eligible to vote, and presto, you have a turnout rate!

When the race was called, this maths problem yielded a rate that was, indeed, historically low. It was also wrong, for the same reason that Clinton trailed in the popular vote at that time: Not all the ballots had been counted. Because the denominator in this maths problem – the number of voting-eligible adults on election day – does not change, the turnout rate goes up every time ballots are counted.

As they have come in, the turnout rate has risen to about 57.7 percent. Michael McDonald at the US Elections Project estimates that it will ultimately be closer to 58.4 percent, a bit lower than it was in 2012 and roughly comparable to most presidential elections in the past 100 years.

Yes, the polls were off, but not in extraordinary ways. Clinton held a modest but steady lead in nearly every national poll for months, and she led most state polls in Florida, North Carolina, Pennsylvania, Michigan and Wisconsin. Yet she lost in each of these states.

So how wrong were the polls? On average, by about 3.4 percentage points in the closest states. That’s higher than in any election in decades but comparable to polling misses in 1988 and 1992. The 2016 polling miss feels much larger because the places where Clinton fared worse than polls suggested were concentrated in a few battleground states.

The places where she fared better than expected were in big liberal states, where she had almost no chance of losing. Nationally, these effects nearly cancelled out, which is why her national polling lead before the election – 3 to 4 points – ended up being close to the result (which, again, is about a 1.5-point lead and is expected to grow as more votes come in).

Third-party candidates, like Gary Johnson and Jill Stein, may have cost Clinton Michigan, but they almost certainly did not cost her the presidency. The total vote tally says about 4 per cent of all voters, about 5.8 million people, voted for Johnson (3.3 per cent) or Stein (1 per cent). In four battleground states that Clinton lost – Florida, Pennsylvania, Wisconsin and Michigan – the votes for these third-party candidates exceeded Trump’s margin of victory. If those states had flipped, Clinton would be president.

If we look at Trump’s margin of victory in these four states and the number of votes cast for Johnson or Stein, we’re left with a simple maths problem: If those candidates did not exist, what share of those votes would Clinton have needed to pick up to overtake Trump’s vote lead? The answer: a substantial share.

Might these voters really have preferred Clinton to Trump to this degree and showed up to the polls at higher rates than they told pollsters they would? It’s possible. But for that vote to be decisive, Pennsylvania or Florida and at least one other state would have had to flip. The evidence we have suggests such an outcome would have been highly unlikely; if anything, the Johnson vote could have easily leaned toward Trump.

Many important questions remain about precisely who voted, and why. Did poor Democratic turnout doom Clinton, or were swing voters the key to Trump’s win? Did Trump really do better among Hispanic voters than Mitt Romney? Further analysis of the voter files – which show who voted and who didn’t – will provide more clarity in the months ahead. Exit polls alone are not a definitive way to answer these questions.

But a few things, as we’ve tried to explain, should be beyond debate.