Trump hints gun owners ‘could do something’ to Clinton’s plan

Donald Trump has suggested that gun rights activists could stop Hillary Clinton from nominating liberal justices to the Supreme Court. In the same speech he also said that he likes Clinton’s protestors,referring to them as ‘so nice and quiet’. 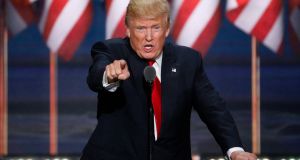 US Republican presidential nominee Donald Trump: “By the way if she gets to pick her judges, nothing you can do, folks. Although the second amendment people, maybe there is, I don’t know.” Photograph: Shawn Thew/EPA

Donald Trump suggested that if Hillary Clinton gets to pick US federal judges as president, there is nothing that can be done to protect the right to bear arms.

But then he added without elaboration that maybe supporters of the second amendment could figure out a way.

He said on Tuesday at a rally in North Carolina: “By the way if she gets to pick her judges, nothing you can do, folks. Although the second amendment people, maybe there is, I don’t know.”

The Republican presidential nominee made the comment on Tuesday at a rally in Wilmington, North Carolina.

The second amendment provides a constitutional right to citizens to own guns.

During the event, he said falsely that Mrs Clinton “essentially wants to abolish the second amendment”.

Mrs Clinton supports some new restrictions on gun ownership, but has not advocated overturning the amendment.

Mr Trump’s comments came after 50 prominent Republican national security officials, including a former CIA director, described him as unqualified to lead the country and said he would be “the most reckless president in American history”.

The statement was the latest repudiation of Mr Trump’s candidacy by senior Republican national security specialists, and was remarkable for the harshness of its language.

“Mr Trump lacks the character, values, and experience to be president. He weakens US moral authority as the leader of the free world. He appears to lack basic knowledge about and belief in the US constitution, US laws and US institutions, including religious tolerance, freedom of the press, and an independent judiciary,” the statement said.

“None of us will vote for Donald Trump,” said the statement, which noted that some signatories also have doubts about Mrs Clinton.

“From a foreign policy perspective, Donald Trump is not qualified to be president and commander in chief,” said the statement, which was first reported in the New York Times.

“Indeed, we are convinced that he would be a dangerous president and would put at risk our country’s national security and wellbeing.”

The statement was organised by Philip Zelikow, who served as a top adviser to former secretary of state Condoleezza Rice.

Mr Trump responded with a statement deriding the signatories as members of “the failed Washington elite” who “deserve the blame for making the world such a dangerous place.”

“These insiders – along with Hillary Clinton – are the owners of the disastrous decisions to invade Iraq, allow Americans to die in Benghazi, and they are the ones who allowed the rise of Isis,” he continued, using an acronym for the Islamic State militant group.

The statement did not cite specific comments by Mr Trump, but it clearly was a response to a series of remarks he has made questioning the need for Nato; expressing admiration for Russian president Vladimir Putin; calling for a temporary ban on immigration by Muslims; and inviting Russia to hack Mrs Clinton’s private email server – which he later said was a joke.

Many of the signatories had declined to sign an open letter disputing Mr Trump’s national security qualifications that was published in March.

“But Donald Trump is not the answer to America’s daunting challenges and to this crucial election,” the statement said. “We are convinced that in the oval office, he would be the most reckless president in American history.”

Some Democratic foreign policy experts called the statement a reminder of the divisions Mr Trump’s nomination has sown within the Republican Party.

“This letter is signed by those who remain in the internationalist wing of the party – many were former advisors to candidates who lost the primary fight to Trump,” said Brian Katulis, a fellow at the Center for American Progress and a Clinton campaign adviser.

“Calling Trump unqualified to be commander in chief is tough, but also asserting that he’s lacking in character and understanding of our basic values is really pretty amazing,” said Tommy Vietor, a former national security council spokesman in US president Barack Obama’s administration.

“That said, I think it’s unlikely to influence many voters, but it could give cover to Republican members of Congress and donors who want to cut the cord and move on from Trump.”