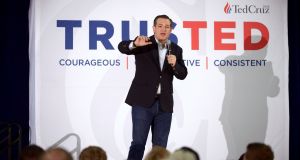 Republican White House hopeful Ted Cruz has vowed to hunt down illegal Irish immigrant “Tommy O’Malley” and deport him as an example of how he would deal with “undocumented” immigrants if he were elected president.

Mr Cruz was questioned about his deportation plans for an estimated illegal 12 million immigrants during a Monday night appearance on The O’Reilly Factor, the Fox News programme hosted by commentator Bill O’Reilly.

The Texas senator, who is running second in the Republican presidential polls behind billionaire Donald Trump, said that, as president, he would send federal agents to track down undocumented immigrants in their homes.

The conservative senator said that, like Mr Trump, he would round up and forcibly deport illegal immigrants but, unlike the businessman, would not let them re-enter the country if they had broken US immigration laws.

Pressing Mr Cruz to elaborate on his policy during the programme, Mr O’Reilly put to him a scenario involving a fictional illegal immigrant originally from Co Cork who has settled with his family in New York State, and how he would deal with that immigrant if Mr Cruz was president.

“So Tommy O’Malley from Co Cork in Ireland is over here and he overstays his visa and he has got a couple of kids and he has settled into Long Island, and you, President Cruz, are going to send the Feds to his house, take him out and put him on a plane back to Ireland?” asked O’Reilly.

“You better believe it,” Mr Cruz replied. “Right now, we actually can’t do that because we don’t have a biometric exit-entry system so we don’t know when, in your example, Tommy goes home.”

O’Reilly challenged the senator’s proposals, saying that a US federal court would likely block him from “taking Mr O’Malley and putting him on a plane because of due process”.

“I spent my entire life as a constitutional lawyer,” said the Texan in response. “So federal law right now requires a biometric exit-entry system on visas. The Obama administration refuses to enforce federal law.

“As president I will put that in place so we will know the day someone overstays their visa and be able to send law enforcement to apprehend them and send them home.”

Mr Cruz said that in contrast to Mr Trump and Florida senator Marco Rubio, his main Republican Party rivals in the race to the White House, he would enforce existing law and block deported illegal immigrants from entering the country again.

“I think Donald Trump and Marco Rubio are wrong to drive down wages and take away Americans’ jobs by giving 12 million people here illegally US citizenship. That is not consistent with American law,” said Mr Cruz.

The 45-year-old first-term senator was speaking on a subject on which the leading Republican contenders have hardened their stances in response to Mr Trump’s nationalist, anti-immigrant rhetoric and policies that have helped him win two of the first three presidential nominating contests.

It is not known how many so-called undocumented Irish are living in the US but the Irish Government and Irish-American immigration activists have put the figure at in the region of 50,000.

Mr Cruz, the Canadian-born son of a Cuban immigrant and an American mother with Irish and Italian roots, has referred in stump speeches on the campaign trail to the “legendary Irish wit” of his political hero Ronald Reagan.

Asked by The Irish Times at a campaign stop at a farm last month in Osceola in rural Iowa whether he, like Reagan, tries to use this Irish trait to his advantage in political life, Mr Cruz said: “I certainly do my best. Being half-Irish, that is a part I need to channel more and more every day.”