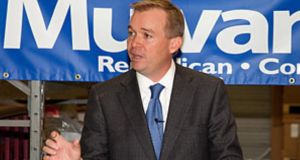 The Republican congressman from South Carolina hosted the party in an Irish pub in Washington on March 13th, the first day of Mr Kenny’s annual St Patrick’s Day trip to the US.

The invitations, emailed by Republican fundraising firm Gula Graham Group, showed the Taoiseach as the headline special guest ahead of Republican majority whip Kevin McCarthy and “at least” 12 Republican congressman – many of whom are either Tea Party members or popular within the faction.

At the end of an emailed invitation, guests were asked to send contributions payable to “Mulvaney for Congress” to the Gula Graham Group, according to the email from the firm’s Jon Graham.


Highly unusual
It is highly unusual for a foreign leader to be linked with an effort to raise campaign funds for a US political party.

A Government spokesman said the fundraising question was not an issue for the Taoiseach. He said the reception was a “drop-by” event as part of Mr Kenny’s lobbying efforts to pass immigration laws to help illegal Irish seeking legal status in the US.

Mr Kenny did not speak at the reception, but used it as an opportunity to network with Republicans, he said.

Government officials have over the past year stepped up efforts to lobby Republicans on immigration reform as the party will determine whether it will pass Congress. Democrats have helped pass a Bill in the Senate and support the issue in the House of Representatives, where legislation has stalled.

Mr Mulvaney is a member of the Tea Party Caucus in Congress. The Tea Party is opposed to giving so-called undocumented immigrants a path to citizenship.


‘Astonished’
Stella O’Leary, president of the Irish American Democrats political action committee, could not recall a taoiseach attending such a US fundraiser before.

“How do we book him?” she said. “I was astonished to hear that the Taoiseach attended a political fundraiser. If he is doing political fundraising, we would be delighted to have him, since all Irish-American Democratic candidates have been supportive of Irish causes, including immigration.”

“I don’t see anything illegal or impermissible relating to this on US federal campaign laws,” said Paul S Ryan, a lawyer with the Washington-based Campaign Legal Centre.

“This event is not explicitly a fundraising event, for starters,” he added after perusing the invitation.