‘If Trump becomes president, we will have civil war’

Rubio’s Floridians, pushing the senator as a unifier rather than a divider, fear the effect of Trump-induced violence at rallies

Some residents of Little Havana, Miami, are turning their back on presidential candidate Marco Rubio, a local of the Florida suburb, to support Donald Trump. Video Simon Carswell 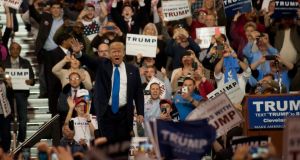 “Screw Trump!” a woman shouts at Marco Rubio as the Florida senator poses for selfies with supporters in his home state at a coffee shop in Tampa.

“I could use a different word,” she tells the candidate as he smiles back, acknowledging the support of a woman who says she is a Democrat.

This display of cross-party support contrasts sharply with the violent scenes that have marred the campaign events of Republican frontrunner Donald Trump. His rage-fuelled rallies and divisive rhetoric have led to clashes between protesters and supporters.

Demonstrators caused chaos at a Trump rally planned at the University of Illinois-Chicago on Friday night, forcing the billionaire to call off the event. The unrest spilled out onto the streets afterwards.

“If Trump is running for the highest office in government, he needs to bring people together and he is not doing that,” said Jessica Pasquotto (40), who has brought her three children to the Oxford Exchange coffee shop next to the University of Tampa to meet Rubio.

“We need to unite people,” Pasquotto added. “That is what Marco Rubio is going to do. He is the only one who can do it. He is a uniter, not a divider.”

Rubio (44) is on a final swing through his home state before the Florida’s Republican primary election on Tuesday a make-or-break contest for a man who was once the party establishment’s preferred nominee but whose campaign has crumbled in the past fortnight.

He is facing an uphill battle to resurrect his campaign, notwithstanding a strong performance in the 12th Republican debate last week.

Recent polls have, on average, shown him trailing Trump by an average of 17 points in Florida, though in a local poll by Tampa’s Ledger newspaper and local television channel WTSP, on Friday he had closed the gap on the businessman to six points: 36 per cent for Trump to 30 per cent for Rubio.

“I promise you, no one will have ever worked harder than we will work this week, than we will work the next three days so that I can win Florida and I can be our nominee,” a hoarse Rubio told a group of lively supporters in the upmarket coffee shop on Saturday afternoon.

The senator joined the other remaining candidates, Texas senator Ted Cruz and Ohio governor John Kasich, in condemning Trump for refusing to denounce the violence that has erupted at this rallies.

McGraw was later recorded on video saying: “The next time we see him, we might have to kill him.”

The businessman has defended his angry rhetoric, blaming the violence on economic issues and unemployment among black youths.

At Thursday night’s Republican debate, Trump was asked whether he thought his remarks had encouraged the violence. CNN debate moderator Jake Tapper referred to the businessman’s comments at his rallies.

“I’d like to punch him in the face,” Trump said of protesters at one rally last month. “In the good ol’ days, they’d have ripped him out of that seat so fast,” he said at another rally. “Knock the crap out of him, would you?” he said of a protester at yet another.

In response, Trump told Tapper that some protesters were “bad dudes.” On Twitter on Saturday, he described the protesters in Chicago the night before as an “organised group of people, many of them thugs”. He later tweeted that it was Bernie Sanders’s and Hillary Clinton’s “people who disrupted my rally”.

Rubio said on Saturday that the “tone and tenor of Donald Trump’s rallies over the past few months has been disturbing to a lot of people”.

The senator’s supporters in Tampa agreed, seeing Trump as someone who would tear the Republican Party apart, not bring it together.

“I feel that if Donald Trump becomes president, we will have a civil war,” said Gale Pergament (65), a retired advertising executive from nearby Brandon, covered in Rubio badges she made herself.

“I feel like he divides people instead of bringing people together, and Marco Rubio will bring peace.”

Jim Bradford, a law enforcement officer for a local sheriff, believes that Trump has chosen not to condemn the violence for “grandstanding purposes.”

Bradford’s daughter Elizabeth, part of Students for Rubio supporters’ group, believes Rubio, not Trump, can bring more people together. She has spoken to students who are registered Democrats, she says, who say that they would vote for Rubio in a general election.

Hillsborough, where Tampa is based, is a barometer for the country, a swing county in the country’s biggest swing state.

It is the only county in Florida that voted for George W Bush twice and then flipped to Barack Obama in 2008. It has picked the winning presidential candidate in every election since 1960 except 1992.

Rubio invested a lot of effort over the weekend in the I-4 corridor, the interstate that bisects the state, from Tampa to Daytona Beach, and an area full of moderate swing voters, hoping to grow his support.

His base is already strong in south Florida, around his home town of Miami. Still, the old Cuban men playing dominos in Maximo Gomez Park in Miami’s Little Havana, home to many of Florida’s Cuban exiles, appeared ambivalent about this son of Cuban immigrants during a visit by The Irish Times earlier this month.

Polls show the Cuban American with a strong lead among Florida’s Hispanic community, but he is trailing Trump among white voters.

Some feel that Rubio’s last-minute surge will stand to him, while Trump and Cruz spread their efforts across Ohio, Illinois, North Carolina and Missouri, all of which also vote on Tuesday.

“He’s looking better all the time,” said supporter Eileen Robbins, originally from Co Monaghan, who has lived in Florida for 50 years. She was standing at the front of the Oxford Exchange coffee shop holding a Rubio sign, waiting expectantly for him to arrive.

“There have been good turnouts everywhere Rubio has been going in the last few days,” Robbins said. “I think people who haven’t voted still may vote for Rubio.”