Donald Trump will accept US election result - ‘if I win’ 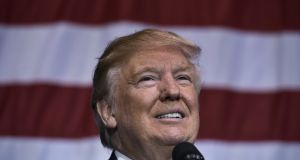 Donald Trump has threatened to challenge the result of the US presidential election if it is “questionable” - although he teasingly promised to embrace the outcome “if I win”.

The Republican presidential nominee said he would accept “a clear election result” but was reserving his right to “contest or file a legal challenge” if he loses.

It was his first attempt to explain his stunning warning a day earlier in the final debate that he might not accept the results.

Mr Trump brushed off the likelihood of that happening with a confident prediction that “we’re not going to lose”.

Speaking at a rally in Delaware, Ohio, he said: “I would like to promise and pledge to all of my voters and supporters and to all of the people of the United States that I will totally accept the results of this great and historic presidential election.”

Mr Trump’s musings about hypothetical Election Day scenarios came as his campaign was reeling from widespread astonishment over his refusal to commit to the time-honoured American tradition of the election’s loser acceding gracefully to the winner.

Mr Trump has warned repeatedly of alleged widespread voter fraud, despite no evidence to support that view and plenty of evidence to the contrary.

Asked at the debate whether he would accept the outcome, Mr Trump said: “I will tell you at the time. I will keep you in suspense.”

That sent immediate shockwaves through the campaign, as Mr Trump’s supporters tried to soften his remarks and fellow Republicans sought more distance from their nominee.

The distraction deprived Mr Trump of the comeback moment he sorely needed, despite a sometimes more measured and poised performance in Wednesday’s third and final debate.

The Republican National Committee, whose chief mission is to get the GOP nominee elected, was put in the remarkable position of disputing its own candidate, with a spokesman saying the party would “respect the will of the people”.

Even some of Mr Trump’s most ardent supporters felt it was a step over the line. Senator Bob Corker of Tennessee said it was “imperative that Donald Trump clearly state” he will accept the results.

Mr Trump’s running mate Mike Pence and campaign manager Kellyanne Conway, both of whom had previously insisted Mr Trump would accept the election’s results, were left trying to assert that Trump would contest the results only under extraordinary circumstances.

As he entered the campaign’s final stretch on Thursday, Mr Trump tried to turn the tables on Hillary Clinton by accusing her of “cheating” and suggesting she should “resign from the race”.

He cited a hacked email that showed Mrs Clinton’s campaign was tipped off about a question she had been asked in a CNN town hall meeting during the Democratic primary.

“Can you imagine if I got the questions? They would call for the re-establishment of the electric chair, do you agree?” Mr Trump asked supporters.

Mr Trump’s effort to shift the conversation back to Mrs Clinton centred on an email from long-time Democratic Party operative Donna Brazile to Mrs Clinton’s campaign in March with the subject line “From time to time I get the questions in advance”. It contained the wording of a death penalty question that Ms Brazile suggested Mrs Clinton would be asked.

“She used these questions, studied the questions, got the perfect answer for the questions and never said that she did something that was totally wrong and inappropriate,” Mr Trump said of Mrs Clinton. He said Ms Brazile should resign as the head of the DNC.

All that was overshadowed by Mr Trump’s comments about the election results, which marked the culmination of weeks of escalating assertions that “this election is rigged” against him and that Mrs Clinton was trying “to steal it”.