US Senator Ted Cruz, a leading former rival of Republican presidential nominee Donald Trump, was cheered and booed after he held back on offering Trump an endorsement during his speech at the Republican Convention. Video: Reuters 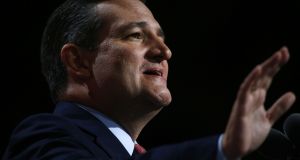 Anger and rage ripped through the Republican Party’s national convention in Cleveland on Wednesday night when Texas senator Ted Cruz refused in his prime-time speech to endorse the party’s presidential nominee Donald Trump.

After months of mud-slinging and personal insults between two bitter rivals during one of the most acrimonious primary elections in generations, the loser refused to bow to the victor in a stunning snub of the candidate who won the most primary votes of any Republican candidate in history.

The freshman Texas senator, a conservative firebrand famed for his rebellious streak and unpopularity in Congress, was booed from stage after he told Republicans to vote their conscience in the November 8th election and declined to offer his endorsement of the New York businessman.

He sparked scenes of fury around the convention hall and one of the most dramatic moments at a modern US political party convention. It was a level of vitriol not seen since 1964 when New York governor Nelson Rockefeller was booed after calling on Republicans to repudiate ideological extremists.

The clash undermined renewed efforts by the party to restore order to a Republican convention already shaken by internal revolts and a plagiarism scandal involving Mr Trump’s wife Melania.

The refusal of a prime-time speaker at a national convention to back the party’s presidential nominee is highly unusual and followed a number of speakers last night who supported Mr Trump but barely mentioned his name during their addresses to the Republican gathering.

The Texas senator cast another shadow over the party’s efforts to unify the party through the introduction later last night of vice-presidential candidate, Indiana governor Mike Pence, a bridge-building candidate chosen to appease social conservatives alienated by the thrice-married Mr Trump (70) and his bombastic campaign.

“Please don’t stay home in November,” Mr Cruz implored the crowd. “Stand, and speak, and vote your conscience, vote for candidates up and down the ticket who you trust to defend our freedom and to be faithful to the constitution.”

His words were a clear non-endorsement of Mr Trump given his repeated questioning of the billionaire’s conservative credentials during their brutal primary fight.

Republican delegates across the convention floor and around the Quicken Loans Arena interrupted him with loud boos and chants of “We want Trump!” and “Say his name!”

Delegates from New York on the convention floor, immediately in front of the podium, shouted and gesticulated angrily at the Texas senator, chanting: “En-dorse Trump! En-dorse Trump!”

“I appreciate the enthusiasm of the New York delegation,” he said, deviating off script to acknowledge the rage bubbling up among the delegates on the floor to his right.

Some of the angry reaction from floor of #RNCinCLE to Ted Cruz over his non-endorsement of Donald Trump https://t.co/slygdGwhxE

Members of Mr Trump’s family sat stony-faced in the VIP seats at the back of the arena. So too did New Jersey governor Chris Christie, another vanquished Republican primary contender now advising Mr Trump, who was sitting among the delegates from his home state.

Mr Trump contributed to the drama of Mr Cruz’s act of insurgency by entering the arena to join his family just as the Texan left the stage to deafening boos and jeers echoing around the arena.

In a scene that could have been lifted from one of his reality-TV show, the property and entertainment mogul waved, gave the thumbs and applauded supporters, whipping up the audience and milking the cheers and applause as the Texas senator wrapped up his speech.

Hillary Clinton, Mr Trump’s Democratic rival, jumped on Cruz’s revolt, tweeting: “Vote your conscience,” and a link to her website.

Speaking shortly after Mr Cruz on the podium, Newt Gingrich, the former speaker of the US House of Representatives, did some damage control seeking to clarify Mr Cruz’s position.

“So to paraphrase Ted Cruz, if you want to protect the constitution this fall, there’s only one possible way and that’s to vote the Trump-Pence ticket,” he said, to cheers from the crowd.

Despite the attempt to put a positive gloss on an moment of negativity and embarrassment for Mr Trump, the Texan drew angry reactions from across the Republican political spectrum.

Delegates looked away from Mr Cruz and his wife Heidi as they walked with security staff to the upper tiers of the arena after his speech and, according to CNN, people approached him and insulted him in the arena’s suites where the party’s big donors were watching proceedings.

The Texan was said to have been turned away as he tried to the enter the suite of Las Vegas casino owner Sheldon Adelson, one of the biggest donors to the Republican Party.

“And quite frankly, I think it was something selfish. And he signed a pledge, and it’s his job to keep his word,” he said, referring to the pledge Republican officials made each candidate sign almost a year ago vowing to support the eventual nominee in order to prevent a third-party run by Mr Trump.

Former Arkansas governor Mike Huckabee, another of the party’s 16 candidates who lost to Mr Trump this year, denounced Mr Cruz’s actions, suggesting that he had his own future political ambitions in mind rather than the unity of the party. Earlier yesterday, the Texas senator’s supporters chanted: “2020! 2020!” at an event, urging him to run against for president in four years’ time.

“I saw a self-absorbed politician grab the microphone and try to line up his own future. Ted walked in tall and walked out small,” said Mr Huckabee in a post on Facebook.

“In Texas, our word is our bond. Obviously he reiterated that he is not a true Texan tonight,” Colton Buckley (21), from Gatesville in the Lone Star State told The Irish Times.

“I am not surprised. That is what Ted Cruz is known for: bucking the system. I think it damages the party. The whole idea is that we cannot allow Hillary Clinton to be in the White House.

““I am very disappointed,” said Kent Winder (65), from Salt Lake City in Utah, a state that overwhelmingly voted for Mr Cruz.

“Cruz signed the pledge, Donald Trump is our nominee and the party needs to come together.”

One Cruz supporter played down the internal ructions over the senator’s speech, pointing to the fact that Mr Trump and Mr Cruz have never hidden their dislike for one another.

“He did endorse him; he just didn’t say his name,” said Tammi Sturm (46) from Houston, Texas, wearing a shirt in the colours of the state flag.

“He told everybody in this room that they cannot miss voting in November. There’s only one candidate that we can vote on in November that is our nominee and that is Donald Trump.”