Woman (39) overjoyed as she hears for first time since birth 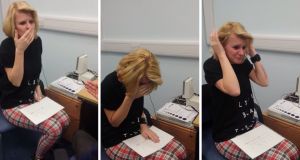 Joanne Milne, who was deaf since birth and having never heard a sound, as she hears for the first time. Photograph: Tremayne Crossley/PA Wire

Deaf since birth and having never heard a sound, the moment a woman hears for the first time and has her life transformed has been captured on film.

Joanne Milne (39), from Gateshead, was born deaf, and during her 20s also began to lose her vision due to the rare medical condition Usher Syndrome.

But last month she was fitted with cochlear implants and after 40 years of silence the life-changing procedure has meant she is now able to hear.

The incredible moment when she hears a nurse going through the days of the week was filmed by her mother and shows her bursting into tears in shock.

“The switch-on was the most emotional and overwhelming experience of my life and I’m still in shock now. The first day everybody sounded robotic and I have to learn to recognise what these sounds are as I build a sound library in my brain,” she said.

“Hearing things for the first time is so, so emotional, from the ping of a light switch to running water. I can’t stop crying.

“I can already foresee how it’s going to be life changing and the implants will get better and better over time, I’m so so happy.”

Joanne, who works for charity Sense, said she was now a lot more aware of things around her, which was a huge help given that she is also blind.

“I’m also attempting to use the telephone at one point but it’s one step at a time as it’s all so daunting. It’s the small things that are huge life changing experiences to me right now and this will probably last a few months,” she said.

“Over the last 48 hours hearing someone laughing behind me, the birds twittering and just being with friends — they didn’t have to tap my arm or leg to get my attention, which is a massive leap for a deaf person.”

She thanked the team at the Midlands Implant Centre at the Queen Elizabeth Hospital, Birmingham, for the procedure and said their support had been fantastic.

As a result of the transformation her friend Tremayne Crossley decided to make her a compilation of songs selecting one from each year of her life.

He then sent the compilation to radio presenter Lauren Laverne for her programme on the station BBC Radio 6 Music.

After the playlist was featured on the show, Ms Laverne tweeted: “Just watched a video of today’s #Memory Tape recipient having her cochlear implant turned on and hearing for the first time. Studio in floods.”

Some of the songs on the list included Silly Love Songs by Paul McCartney, Tainted Love by Soft Cell, Digital Love by Daft Punk and One Day Like This by Elbow.