US calls on Russia for tougher stance on Syria 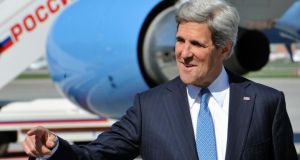 US secretary of state John Kerry is in Moscow today for talks with Russian president Vladimir Putin. Photograph: Mladen Antonov/Pool

US secretary of state John Kerry has asked Russian president Vladimir Putin for a tougher stance on Syria at a time when Israeli air strikes against the Middle Eastern nation have added an unpredictable factor to the talks.

Mr Kerry is in Moscow a meeting with the most powerful ally of Syrian president Bashar Assad’s regime and he hopes to change Moscow’s thinking on Syria with two new angles: American threats to arm the Syrian rebels and evidence of chemical weapon attacks by the Assad regime.

Over the weekend, Israeli warplanes targeted what Israel claimed were caches of Iranian missiles bound for Hezbollah, the Lebanon-based terror group. Such weapons would allow Hezbollah to strike Tel Aviv and as far as southern Israel from inside Lebanese territory.

Israel’s willingness to hit Syrian targets it sees as threats to its own existence has complicated the Obama administration’s internal debate over what to do about Syria.

Israel’s actions put Damascus and Moscow on notice that the US and its allies may not wait for an international green light to become more actively engaged in the Syrian conflict. The administration said last week it was rethinking its opposition to arming the Syrian rebels or taking other aggressive steps to turn the tide of the two-year-old civil war toward the rebels.

At the same time, Israeli involvement in the war carries risks. Instead of prodding Russia into calling for Dr Assad’s removal, it could bring greater Arab sympathy for Dr Assad and prompt deeper involvement from Iran and Hezbollah, actors committed as much to preserving Dr Assad as to fighting the Jewish state.

Russia, alongside China, has blocked US-led efforts three times at the United Nations to pressure Dr Assad into stepping down. US officials hope Syria’s behavior could shift Russia’s stance.

“We have consistently, in our conversations with the Russians and others, pointed clearly to Assad’s behavior as proof that further support for the regime is not in the interest of the Syrian people or in the interest of the countries that have in the past supported Assad,” White House spokesman Jay Carney said.

Turkish Prime Minister Tayyip Erdogan said today that an Israeli air strike on Damascus was unacceptable and had given the Syrian government an opportunity to cover up its own killings.

“The air strike Israel carried out on Damascus is completely unacceptable. There is no rationale, no pretext that can excuse this operation,” Mr Erdogan said in parliament.