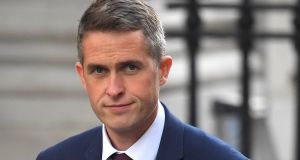 Mr Williamson (41) had been the Conservatives’ chief whip since last year, forming a key part of prime minister Theresa May’s inner circle and helping to broker the confidence-and-supply agreement with the Democratic Unionist party that kept her in power. He is perhaps best known for keeping a pet tarantula called Cronus in his office in Westminster.

His promotion on Thursday attracted criticism from some Conservative MPs, who said that Ms May was weak to appoint the same person who had advised her on Sir Michael’s resignation.

“It’s a disastrous appointment,” said one prominent backbencher. “Many [MPs are] saying it’s her biggest and probably last mistake.”

Sir Michael departed on Wednesday night, becoming the first scalp in a sexual harassment scandal that has swept through Westminster. He admitted publicly that he had repeatedly touched a journalist’s knee 15 years ago, and could not privately guarantee to Ms May that further allegations of sexual misconduct would not emerge.

Downing Street is seeking to avoid a broad reshuffle that could destabilise the government. However, Ms May has faced calls to bring younger MPs into her cabinet in an effort to refresh the Conservatives’ image following the loss of their parliamentary majority in June.

Mr Williamson is 24 years younger than Sir Michael and the youngest British defence secretary since the post was created during the second World War. He was elected as an MP in 2010 and does not have military or ministerial experience.

Sarah Wollaston, a Conservative backbencher, appeared to criticise Mr Williamson’s decision to take the role, saying: “There are times when offered a job that it would be better to advise that another would be more experienced and suited to the role.”

Downing Street said Mr Williamson “wasn’t involved” in the reshuffle, and said he had been “an excellent and hardworking chief whip”.

Sexual harassment allegations at Westminster have emerged in the wake of the Harvey Weinstein scandal, and have affected all the main parties. Ms May has called for a new parliamentary grievance system to allow those who work with MPs to make complaints about inappropriate behaviour.

The Sunday Times has reported that Conservative whips were aware of sexual misconduct allegations against their MPs. Downing Street denied any “dossier” of bad behaviour existed, or had been seen by Ms May.

Julian Smith, the deputy chief whip, will replace Mr Williamson as chief whip. His immediate tasks include avoiding government defeats on the EU withdrawal bill, the flagship piece of draft legislation that sets the legal framework for Brexit. Esther McVey, the MP for Tatton, will become deputy chief whip.

Sir Michael was one of only three cabinet ministers to have been in his post for three years. He had been pushing for an increase in defence spending in next month’s autumn budget, saying last month that the UK “should aim to do better than” the Nato benchmark of 2 per cent of gross domestic product and pointing to “intensifying” security threats.

Of the 24 MPs who attend cabinet meetings, 11 were first elected to the Commons in 2010. Other potential candidates for the defence secretary role included Tobias Ellwood, a defence minister, and Penny Mordaunt, a pensions minister and Royal Naval reservist who would have been Britain’s first female defence secretary. – Copyright The Financial Times Limited 2017