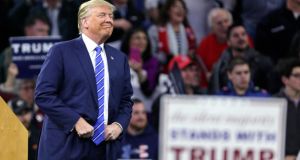 Republican presidential candidate Donald Trump during a campaign stop at the Tsongas Center in Lowell, Massachussetts, in the US. Photograph: AP Photo/Charles Krupa

British lawmakers are to hold a debate on a petition signed by more than half a million people calling for US Republican presidential candidate Donald Trump to be barred from Britain, following his proposal to stop Muslims entering the US.

The debate, called by the Petitions Committee of the lower house of parliament, will be held on January 18th.

However, it will not be followed by a vote.

The British government responds to all petitions that gain more than 10,000 signatures and topics are considered for parliamentary debate if they reach 100,000 signatures.

“By scheduling a debate . . . the committee is not expressing a view on whether or not the government should exclude Donald Trump from the UK,” said committee chairwoman Helen Jones.

“As with any decision to schedule a petition for debate, it simply means that the committee has decided that the subject should be debated,” she said in a statement.

“A debate will allow a range of views to be expressed.”

Last month Trump, a billionaire developer and frontrunner for the Republican presidential nomination, prompted international outrage with his call for a ban on all Muslims entering the US.

His comments followed a shooting spree by two Muslims in California, who the FBI said had been radicalised.

Chancellor of the exchequer George Osborne said Trump’s comments flew in the face of the founding principles of the US, but that banning him from Britain was not the best way to respond.

In the past, people have been banned from entering Britain for fostering hatred that might provoke inter-community violence.

The petition said: “If the United Kingdom is to continue applying the ‘unacceptable behaviour’ criteria to those who wish to enter its borders, it must be fairly applied to the rich as well as poor, and the weak as well as the powerful.”

The petition was launched by Suzanne Kelly, a Scottish-based campaigner and a longtime critic of Trump’s latest golf course in Aberdeenshire.