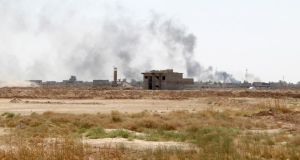 US air strikes near a Shia Turkoman town north of Baghdad have cleared the way for militiamen and Iraqi troops to rescue 12,000 residents from jihadis who had besieged them for more than two months.

The jihadis from the extremist group Islamic State in Iraq and Syria (Isis) had partially withdrawn from the outskirts of Amerli, about 110 miles north of Baghdad, when paramilitaries and Iraqi forces attacked around dawn yesterday.

The attack came hours after US jets had pushed further south into Iraq than at any time in the past three weeks when they have been attacking insurgent positions in support of the Kurds. Aid was also air dropped to Amerli by British, French and Australian aircraft.

Royal Air Force (RAF) aircraft dropped 14 tonnes of food and water on Amerli on Saturday, the defence secretary, Michael Fallon, said as he confirmed that Britain is keeping open the option of joining US air strikes against Isis forces.

The Iraqi forces were heavily backed by Kurdish peshmerga troops and Shia militiamen, who have been at the vanguard of most clashes in central Iraq ever since Isis overran more than one third of the country in mid-June.

The militias have been particularly active in areas of high Shia populations, or where Shia religious sites have come under threat. The residents of Amerli were all Shia Turkomans. They had been unable to escape from the town, which had been cut off from water and electricity supplies. The extremists had vowed to kill them if they did not convert to their puritanical version of Sunni Islam.

The successful rescue of Amerli marks perhaps the only time Iraqi forces, even with strong support, have won a significant clash against Isis, since it took over Mosul, Tikrit, and most of western Iraq. Peshmerga forces, long considered a more competent fighting force, even without a unified command, also withered under an Isis onslaught when the group swept through the Nineveh plains toward Irbil from August 8th.

The extremists’ momentum was stopped by US jets, which have now bombed more than 115 targets in northern Iraq. The air strikes allowed peshmerga and Iraqi forces to win back the Mosul Dam, which had been seized by Isis, and led to the evacuation of tens of thousands of members of the Yazidi sect, who were helped off a mountain range by Kurdish militias that crossed into Iraq from Syria.

Nevertheless, Washington has continued to insist that its air support will not be open-ended. US president Barack Obama has previously said US strikes are only to support US officials in Irbil. The attacks on Isis near Amerli were the first time he had authorised hits outside northern Iraq.

The drawn-out talks continue to raise questions about the viability of Iraq within its current borders. Of particular concern to Iraqi and regional leaders will be whether the country’s Sunnis, who were marginalised when Saddam Hussein was ousted in 2003 will be re-empowered by a political process. – (Guardian service)