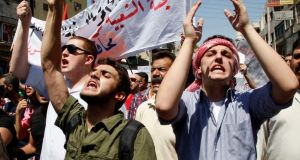 Protesters from leftist parties shout slogans during a demonstration against military strikes on the Syrian government and to show their support for the regime of Syrian president Bashar al-Assad, after Friday prayers in Amman yesterday. Photograph: Majed Jaber/Reuters

UN inspectors yesterday visited a military hospital in Damascus to interview soldiers said to have been affected by a chemical attack by rebels or fundamentalist jihadis.

The mission followed three visits to rebel-held areas in the Damascus countryside after allegations of an August 21st chemical attack blamed on the government by the opposition and western powers.

The head of the team, Aake Sellstroem, is due to brief the UN Security Council tomorrow or Monday, according to secretary general Ban Ki-moon’s spokesman Farhan Haq.

Opposition Syrian National Coalition chief Ahmad Jarba said the refusal of Britain’s parliament to authorise military action to punish Damascus for its purported use of chemical weapons should not deter the US and France. He said that the strikes should not only be punitive but also “paralyse . . . the regime and raise morale” in the opposition camp.

The coalition has consistently called for external intervention to tip the balance of power in favour of the rebels and jihadis who are backed by Saudi Arabia and Qatar. Mr Jarba, a dual citizen of Syria and Saudi Arabia, is regarded as being close to Riyadh.

During a meeting in Istanbul this week, the coalition, reportedly, suggested targets to western envoys, including a major Scud ballistic missile base located on the highway from Damascus to Homs.

Other redeployments of men and materiel are also taking place in and around the capital, creating long detours for people driving into the city from outlying districts.

‘More chaos’
Head of the domestic opposition National Co-ordination Committee Hassan Abdul-Azim told Lebanese daily Al-Akhbar, “A military strike [during] the escalating situation in Syria will result in more chaos and fighting, which would lead us into a sectarian . . . conflict.”

Fierce fighting erupted in Damascus’s Muadamiya suburb, site of an alleged chemical attack, when troops moved in to oust rebels from the strategic area which lies south of Mezza military airbase and west of the main routes connecting the capital with Beirut and the Golan.

Opposition activists in the lower, middle and working-class suburb have said the offensive began on Thursday with heavy bombardment. Both Muadamiya and neighbouring suburb Daraya have been deserted by a large proportion of residents.