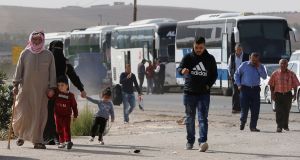 People walk as they wait to travel to Syria at Jordan’s Jaber border crossing, near Syria’s Nassib checkpoint, in Jordan, on October 25th, 2018. Photograph: Muhammad Hamed/Reuters

The move comes two days after Turkish president Tayyip Erdogan issued what he said was a “final warning” to those who would endanger Turkey’s borders, saying Ankara was determined to focus its attention on Syrian Kurdish fighters east of the Euphrates.

The bombardment targeted the Zor Magar area to the west of northern Syria’s Ayn al-Arab region and was aimed at preventing “terrorist activities”, Anadolu reported.

Turkey considers the YPG militia a terrorist organisation and an extension of the outlawed Kurdistan Workers’ Party (PKK), which has led an insurgency in Turkey for more than three decades.

The YPG took control of large areas of northeast Syria in 2012 as government forces pulled out to fight rebels in the west.

Turkey carried out an offensive against YPG forces in northern Syria’s Afrin region earlier this year. Two years ago, Ankara intervened further east in northern Syria to sweep out Islamic State fighters and check the advance of the YPG.

Turkey has in recent months conducted regular strikes on PKK bases in northern Iraq, including the insurgents’ stronghold in the Qandil mountains.

The PKK is deemed a terrorist organisation by Turkey, the United States and Europe.

On Saturday, the first summit on Syria to bring together the leaders from Germany, Russia, Turkey and France ended with a new appeal for a political solution to the country’s seven-year war but sidestepped more contentious issues including the future of Bashar al-Assad’s regime.

A joint communique after talks in Istanbul on Saturday called for a committee to be established and convened in Geneva to review the national constitution by the end of the year as one of the first steps toward a negotiated end to a conflict that’s killed more than half a million people.