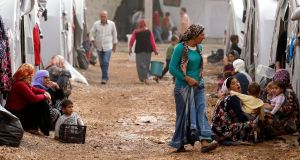 Kurdish refugees from the Syrian town of Kobani in the southeastern town of Suruc, Sanliurfa province today. Photograph: Umit Bektas/Reuters

Fierce fighting is said to under way in a Syrian border town where Kurdish militiamen are struggling to repel advances by the Islamic State group.

The battle for Kobani is raging despite airstrikes by the US-led coalition targeting the militants.

Kurdish official, Ismet Sheikh Hasan, said today’s clashes are focused in the southern and eastern parts of the town. He described the situation as dire.

The director of the Britain-based Syrian Observatory for Human Rights, Rami Abdurrahman, said the town’s Kurdish fighters are putting up a fierce fight but are outgunned by the militants

Since the militants launched their onslaught on Kobani in mid-September, at least 500 people have been killed and more than 200,000 have been forced to flee across the border into Turkey.

America wants to know how far Turkey is willing to go in helping train and equip moderate opposition fighters trying to topple Syrian president Bashar Assad, including whether it will conduct training on its own land, US defence secretary Chuck Hagel has said.

Turkey has agreed to support efforts to train and equip the Syrian opposition, but the US does not yet know whether Ankara is willing to do the training inside Turkey itself.

Saudi Arabia, for instance, has agreed to host training facilities for Syrian rebels on its territory and US officials are still discussing the details with Turkish officials.

“The specifics that go with train and equip — locations, contributions, trainers — will be part of that conversation,” Mr Hagel said in Colombia, his first stop on a six-day trip to South America.

“Part of those discussions will include how far Turkey is willing to go? Certainly one of those questions will be, will they be willing to provide training locations?”

Mr Hagel said a joint team from US Central Command and US European Command will travel to Turkey next week and discuss the different ways it can contribute to the effort to degrade the Islamic State (IS) group militants.

Assad’s forces continue to fight opposition forces, but the Syrian civil war — now in its fourth year — has been eclipsed by the Islamic militants’ battle to overrun the city of Kobani along Syria’s border with Turkey.

In recent months the extremists have taken control of territory across Iraq and Syria at lightning speed. US and coalition forces have been launching air strikes near Kobani, which officials believe could fall to the militants.

The US has been urging Turkey to get more involved in the battle against the extremists. Ankara has hesitated and has persistently asked America to set up a safe zone along Turkey’s border with Syria. Mr Hagel said earlier that such a zone was not actively being considered, although US officials are open to discussing it.

Mr Hagel said that in addition to helping train the Syrian opposition, the US would also like access to the southern Turkish air base at Incirlik from which to launch strikes against the Islamic militants.

Asked if Turkey had agreed to give the US access to Incirlik, Mr Hagel said only that “basing rights would be helpful” and that it would be part of the discussions.