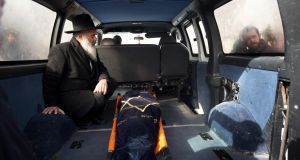 An Israeli settler next to the body of Dafna Meir during her funeral ceremony in the Jewish settlement of Otniel near the flashpoint city of Hebron in the southern West Bank. Photograph: Getty Images

Israeli security forces have arrested a 16-year-old Palestinian suspected of stabbing to death a Jewish settler mother of six on Sunday as her children watched.

Following the attack in the settlement of Otniel, south of the West Bank city of Hebron, Israeli troops sealed off the area and intensive intelligence work, using local contacts and electronic surveillance, led troops to the local Palestinian village of Yatta, some three kilometres from the attack.

Elite troops from the undercover Duvdevan unit woke and arrested the suspect.

Family members are reported to have said he carried out the attack to avenge the death of a relative, killed by Israeli troops a few months ago.

The Otniel killing and an attack on Monday, in which a pregnant Israeli was stabbed and wounded in the settlement of Tekoa, south of Bethlehem, prompted Israel, fearing the possibility of copycat attacks, to bar Palestinians from entering all settlements in a move that affected some 26,000 labourers, mainly construction workers.

In common with many attacks in the wave of violence that began in September, the suspect is believed to have acted alone and had no previous record, making it difficult for the security forces to know of his plans in advance. Israel’s top general, Lt Gen Gadi Eizenkot, said there have been 101 attacks so far, none of which had a prior intelligence warning.

Twenty-five Israelis and one US citizen have been killed in four months of violence, along with at least 148 Palestinians, 94 of whom Israel has described as assailants.

Prime minister Binyamin Netanyahu visited the grieving family in Otniel yesterday and vowed to demolish the home of the assailant and revoke the work permits of his relatives.

He again said Palestinian incitement was behind the wave of attacks.

“There is humanity here and the desire for peace and coexistence on one side and boundless hatred on the other. This hatred has an address; this is incitement by the Palestinian Authority and other elements such as the Islamic Movement and Hamas, and the time has come for the international community to stop its hypocrisy and call the child by its name.”

Palestinian president Mahmoud Abbas said he was opposed to violence and the killing of anyone irrespective of their ethnic or racial background.

“We are concerned over every drop of blood from any person,” Mr Abbas said, vowing that “the resistance will continue through peaceful means, and we will not call for anything else”.

In a fierce attack on the government’s failure to stop the violence, education minister Naftali Bennett, leader of right-wing Jewish Home, criticised a “deadlock in creative thinking” on security.

The creativity of Israel’s enemies – “their determination and innovation – all these are flourishing and improving”, he said. “Israel is being left behind. That’s why we have to refresh our way of thinking, not just our weaponry.”