Hope among the ruins of Aleppo’s cultural heritage

Experts say a third of ancient Syrian city destroyed, but much can be restored 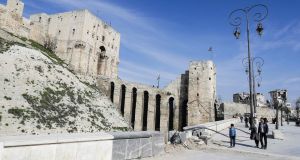 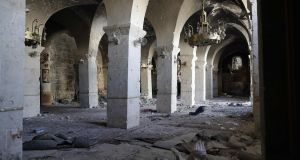 The “Big Mosque”, the name the people of Aleppo give to the eighth century Umayyad Mosque built at the edge of the city’s ancient souq, or market, stands forlorn – no longer a place of worship, but a victim of Syria’s six-year war.

The mosque’s distinctive square 11th century minaret, now a pile of broken stones at the entrance, was either brought down by Syrian army tank fire or detonated by opposition fighters nearly four years ago during heavy fighting along the front line between the government-held western and insurgent-controlled eastern sectors of the city.

Just inside the door, soldiers drink tea in a makeshift tent with television and internet. Two workers gather scrap metal nearby, while a woman takes her granddaughter on a walk round the wide, dusty courtyard.

The cloisters are charred, the red prayer carpets on the floor of the mosque trampled into debris and shredded. No one takes off their shoes to enter the mosque; women do not cover their heads. The war-wounded mosque, the spiritual centre of the Sunni Muslim community – 80 per cent of the city’s population – has been reduced to a building site.

Along the railing of the Citadel’s moat, a group of schoolchildren clad in red sweaters listen to their teacher expound on the history of the lightly damaged fortress that dominates the city. The massive Citadel, dating to the 3rd millennium BC, is among the world’s most ancient castles.

A soldier at the high arched gate breaks the rules by allowing us to climb scores of stone steps, largely in the dark, to the flat top of the monument, an expanse covered in yellow wild flowers with a fantastic view of the city. The Citadel remained in Syrian army hands throughout the five years of fighting here. The saying goes, “Whoever holds the Citadel, rules Aleppo” and, local folk claim, Syria.

Both sides took these words seriously and fought hard for the Citadel.

The Carlton Hotel, a favourite of tourists which once stood across the wide plaza next to the Citadel, was destroyed in 2014. Islamic Front fighters detonated explosives in tunnels they dug under the 150-year-old building, where soldiers had been billeted, killing five and wounding 18.

We enter Old City streets laid out on a grid by fourth century BC successors of Alexander the Great. Sixty per cent of the shops in the souq have been destroyed or damaged, their wooden doors and panelling smashed, interiors scorched. Sections of the market date to the 13th century AD, although most was constructed during the Ottoman period, stretching from the 16th to 19th centuries.

Entire streets of the small, shallow shops are burnt; others were destroyed by bombing and shelling.

Three men climb over the holed roof of what had been a large shop selling imported French knitting wool. The elderly owner in grey suit and tie, paying his first visit, is in shock and needs help to climb down from his precarious perch. He tosses a sodden skein of orange yarn onto a heap of stones.

A blue gas canister bomb with a rusty tail lies in a patch of grass growing between the ruins of shops, storehouses, and craft shops: the rebel equivalent of the government’s barrel bombs.

Unexploded ordnance remains a danger. Last week an unsuspecting civilian heard a click underfoot as he was exploring the souq and was immobilised for four hours until de-miners freed him.

Director of antiquities Maamoun Abdulkarim tells The Irish Times: “The damage in Aleppo is more than all other sites in the country.” Nevertheless, most of Aleppo’s built heritage can be retrieved. “Thirty per cent of the Old City is destroyed, catastrophic. Forty per cent is good and 30 per cent has medium damage and can be restored.”

The ancient souq is, however, 60 per cent destroyed or burnt. At least 10 buildings need emergency work before next winter and this must be done with traditional materials.

“We must adopt a philosophy for the restoration of Aleppo that will allow the people to come back. We must develop concepts for restoration without the confusion of politics,” says Abdulkarim.

“For me, Aleppo has been liberated from the war. Aleppo is one of the most beautiful cities in the Middle East and needs to be restored not slowly, not quickly. The challenge of Aleppo is the biggest challenge after the war. We need money, expertise and respect for cultural heritage.

“We need good partners. Unesco is advising. The Aga Khan Foundation has proposed to renovate the heart of Aleppo, the Citadel, the ancient souq, and the Umayyad Mosque. This amounts to about 20 per cent of the Old City.

“The foundation has excellent experience. It worked in Aleppo before the war. The work will go quickly if we collect all the local partners, the municipality, the social affairs ministry, and go step-by-step.”

Abdulkarim speaks of former Italian culture minister Francesco Rutelli, who arranged for the restoration of second and third century marble funerary busts, one of a man and the other of a woman, from the ancient Syrian city of Palmyra. They were damaged by hammer wielding Islamic State fighters who captured the site in May 2015 and that August beheaded Khaled al-Asaad (81), Palmyra’s curator.

The busts were taken to Rome via Beirut, restored by experts from the Instituto Centrale del Restauro and displayed in an exhibit at the Colosseum . Until Palmyra is safe, the busts will remain in Rome.

The vast desert site was seized for a second time by Islamic State last December and retaken by the Syrian army early this month. Abdulkarim compares the busts to “dear persons who went to an excellent hospital in Europe and are now in excellent health”.