Hamas condemns Paris attacks as having no justification 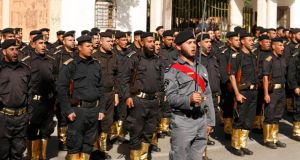 The Hamas group that controls the Gaza Strip on Saturday issued a condemnation of the deadly attacks by Islamist gunmen in France this week, saying there was no “justification for killing innocents”.

In the worst assault on France’s homeland security for decades, 17 victims lost their lives in three days of violence that began with an attack on the Charlie Hebdo satirical newspaper on Wednesday and ended with Friday’s dual sieges at a print works outside Paris and a kosher supermarket in the city.

“[Hamas] stresses that its position on the latest events in Paris is in line with the statement issued by the International Union of Muslim Scholars which condemned the attack on the Charlie Hebdo newspaper and that any differences in opinion are no justification for killing innocents,” Hamas said in a rare statement in French.

On Friday, the leader of Lebanon’s Shia group Hezbollah said the attacks in France had done more harm to Islam than any cartoon or book, a reference to the attack on Charlie Hebdo.