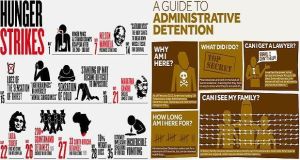 Visualising Palestine’s objective is to illustrate in a single graphic what is happening in the occupied Palestinian territories, in order to make an impact on global public opinion.

The first infographic produced for the website Visualising Palestine, published in February 2012, was sensational. It showed what happens during hunger strikes, giving examples from history and featuring Palestinian administrative detainee Khader Adnan, who persevered for 66 days before Israel agreed to free him.

At the time of his most recent arrest, Adnan was not charged with any crime but was held for “activities that threaten regional security”. Having served prison time but never been accused of harming Israelis, he had ceased acting as spokesman for Islamic Jihad and was running a bakery while serving on a reconciliation committee and studying for his MA at Bir Zeit university.

A further 19 graphics have since been produced by a diverse and inventive team of researchers, writers, artists and computer buffs who harvest data, compose narratives based on the data and turn them into infographics.


Global public opinion
The objective is to illustrate in a single graphic what is happening in the occupied Palestinian territories, in order to make an impact on global public opinion, which largely has been shaped by an expertly processed Israeli narrative.

Visualising Palestine is the brainchild of Ramzi Jaber, a Palestinian born to West Bank parents in a Jerusalem hospital. Consequently he is regarded as a West Banker and possesses a green-jacketed Israeli ID, which bans him from Jerusalem without a permit. Jerusalem IDs have a blue cover. During the summer this year he visited the city of his birth for the first time in 14 years.

Ramzi dismisses the notion that there is a distinction between Palestinian territories occupied in 1967 and Israel.

“All Palestinian IDs are approved by the Israeli interior ministry. There is one territory, one border, one army, one economy, all controlled by Israel.”

He grew up between Ramallah and the Gulf emirate of Sharjah, took a degree at McGill University in Canada and worked in Dubai before returning to Ramallah.

There he spent 18 months producing TEDxRamallah (an independent event licensed by the US nonprofit ideas organisation TED) in 2011, which brought Palestinians together on video links between Bethlehem, Amman and Beirut to tell their stories.

His co-producer was Joumana al-Jabri, a Syrian architect who grew up in Saudi Arabia and studied at the Rhode Island School of Design before working in Dubai, where she met Ramzi.

They are co-founders of Visualising Palestine.

While touring the West Bank to prepare TEDxRamallah, Ramzi was shocked by the “never-ending cycle of trouble” Palestinians face.

“There are 700 Palestinian children imprisoned every single year,” he said. “After the Israeli occupation in 1967, all of the West Bank’s water was given to Israel’s Mekorot company for one shekel.”


What upsets him most is that “respectable agencies are documenting what happens,” providing “data nobody uses”.

Visualising Palestine’s graphics normally take six to eight weeks to finalise, though the one about Adnan was rushed through as the prisoner “was dying”. It appeared on Twitter before being published on the website.

The graphics are created by a multinational core team of seven, average age 31, assisted by part-timers and a fluctuating number of volunteers from around the world, from the
US west coast to the Gulf emirates. In addition to Palestinian and Syrian-Saudi Arabian, core members are Lebanese, Yemeni-American, American, English and Italian-Dutch.

Their base is a tiny cottage, next to the Sursock palace in Beirut – there are offices in Amman and Ramallah also.

Ramzi describes production as a “social venture” involving workshops, brainstorming and exchanges with a wide range of people.

“We seek to emulate Wikipedia, which has 80,000 contributors and 77 full-time staff,” he said. Ramzi and Jouman are volunteers, as neither takes a salary.

Ninety per cent of outreach has been via social media, said Chris Fiorello, a Californian. This is changing, however: their graphics have appeared in the Huffington Post, the Guardian, Al-Jazeera International, the Daily Beast and Open Democracy and in Arabic, French, Spanish, Korean and Finnish as well as English. Visualising Palestine also provides material for activist organisations.


Pro-Israel lobby
In March, infographics calling for an end to $30 billion in weapons aid to Israel were taken to the streets of Washington DC during the annual conference of the US pro-Israel lobby. One enlarged graphic was mounted on a pick-up truck and used to stalk lobbyists on their way to Congress.

Two others were displayed at metro stations. Visualising Palestine’s partner in this venture was the Campaign to End the Israeli Occupation.

The website receives support from the Arab Fund for Arts and Culture, the Jerusalem Fund and the South African Shuttleworth Foundation and raises funds from the sale of its graphics.

It has launched a campaign to secure donations, aiming to become financially self-sufficient while publishing free content under a creative-commons licence.

The team is also moving beyond strictly Palestinian issues, producing, for example, a stunning graphic – on a new site, Visualising Impact – that juxtaposes politicians’ salaries with GDP per capita.

Kenyan politicians topped the lot by taking 97 times more in income than average constituents; Palestinian politicians came second with a multiple of 24.