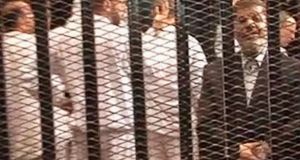 Ousted Egyptian president Mohamed Morsi stands in a cage in a courthouse in Cairo during his trial. Photograph: Egyptian interior ministry/via Reuters

Egypt’s Muslim Brotherhood has condemned the decision of a Cairo appeal court to uphold the ruling banning the movement and its affiliates and calling for a confiscation of its assets.

The ruling, issued in September, prohibited “all activities” of the Brotherhood and “any institution derived from or belonging to [it] or receiving financial support from it”.

In a statement released after the appeal court’s judgement, the 85-year-old movement asserted, “The Muslim Brotherhood is not a sentence that can be crossed out of a book, or a shop that can have its licence revoked by an administrative decision or a politicised ruling.”

The Brotherhood was founded by school teacher Hassan al-Banna as a revivalist, anti-colonial and charitable movement serving the poor. It gained political stature by taking part in the Egyptian struggle against the British and deploying fighters from its underground militia in Palestine during Israel’s war of establishment.

Retaliation
The movement was banned in 1948 following bombings and assassination attempts. In response a Brotherhood member killed the prime minister and Banna was murdered in retaliation. The Brotherhood was again proscribed in 1954, accused of attempting to murder president Gamal Abdel Nasser.

Nevertheless, the movement and its social and commercial networks survived because it was more often tolerated than repressed and, at times, even co-opted by the government. The Brotherhood was permitted to field independent candidates for parliament and created alarm by winning 20 per cent of the seats in the 2005 election.

Following the 2011 uprising that toppled Mubarak, the Brotherhood was liberated. That April it founded a political wing, the Freedom and Justice Party, and in March 2013, registered as a non-governmental organisation. This status was revoked last month and a high-ranking legal commission has recommended dissolving the party.

A senior Egyptian security official told the Associated Press, “The plan is to drain the sources of funding, break the joints of the group, and dismantle the podiums from which they deliver their message.”

This is a tall order. In addition to its own 40-60 schools and 30 hospitals, the Brotherhood operates 50 lucrative businesses which, along with members’ dues and donations, finance activities. At least 10 schools have been closed and hospitals raided.

While the government can take over Brotherhood institutions and businesses, the shambling Egyptian bureaucracy will have to run schools and hospitals properly to avoid a backlash.

However, Brotherhood stalwarts cannot be purged from the society. Tens of thousands of rank-and-file members are school teachers who form the minds of children in the public system while mid-ranking and senior Brotherhood figures are generally university graduates in medicine, engineering, and other scientific disciplines and are productive citizens.

Closing down the Brotherhood could drive the most committed underground and prompt some to carry out attacks on military and government targets. Some could defect, and others could attach themselves to other fundamentalist groups, such as the Strong Egypt Party and ultra-orthodox Salafi factions.

Salafi jihadis in Sinai have already begun taking revenge on troops and police for the ousting of president Mohamed Morsi, of the Brotherhood. There is concern that jihadis could resume the “violent 90s” scenario when tourists were slain and held hostage.

The failure of the Egyptian Brotherhood, the parent of mainstream fundamentalist movements everywhere, to deliver, and its refusal to rule democratically in partnership with secular, liberal and leftist parties, could cripple the cause of “political Islam” across the Muslim world.