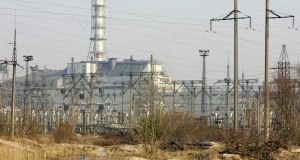 Ukraine will today mark 30 years since an explosion tore through its Chernobyl atomic power station in the world’s worst nuclear disaster.

Commemorative events will also be held in Belarus and Russia, the other countries worst affected by the accident, which released 400 times more radiation than did the atomic bomb dropped on Hiroshima in 1945, and contaminated more than 100,000sq km of territory with radioactive fallout.

Reactor number four of Chernobyl power station, located some 100km north of Kiev close to Ukraine’s border with Belarus, exploded in the early hours of April 26th, 1986, as Soviet engineers conducted an experiment to test how it would behave during a power cut.

A combination of basic design flaws in the reactor and human error led to a catastrophic, uncontrolled power surge that ripped the reactor apart, hurling its 2,000-tonne protective “lid” through the roof of the building.

Soviet officials evacuated residents of the nearby workers’ city of Pripyat 36 hours after the blast, and did not release news of the accident until the evening of April 28th, when a Swedish power plant detected high radioactivity.

About 30 people perished in the explosion and emergency response, but debate rages about the overall number of people who have died as a result of the incident, with estimates ranging from a handful to many thousands.

The World Health Organisation recognises a “dramatic increase in thyroid cancer . . . among those exposed at a young age” to the fallout, and “some indication of increased leukaemia and cataract incidence among workers” in the clean-up operation. Other organisations say the broader health impact has been far larger.

Ukraine’s Chernobyltsy have protested in Kiev and elsewhere in recent months against reductions to their benefits and cutbacks to social spending, as Ukraine’s government tries to revive its ailing economy.

The concrete “sarcophagus” erected around reactor four after the accident will next year be covered by a vast €1.5 billion steel housing, funded by more than 40 states including Ireland, which is now being built on the site.

In recognition of the humanitarian work of Cork-based Chernobyl Children International, the charity’s founder Adi Roche has been invited to address the United Nations General Assembly today.