Major nationalist role in protests worries many in Ukraine and abroad 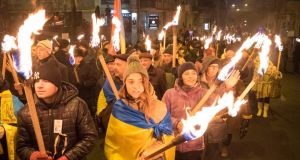 Activists of the Svoboda (Freedom) Ukrainian nationalist party hold torches as they take part in a rally to mark the 105th year since the birth of Stepan Bandera, one of the founders of the Organization of Ukrainian Nationalists (OUN), in Kiev on January 1st. Photograph: Gleb Garanich /Reuters

As Ukraine’s opposition movement vows to continue its “revolution” with more protests and a general strike, an ultra- nationalist party is playing a leading role and former symbols of the far-right fringe are moving into the political mainstream.

Flying above crowds in Kiev and other cities, the flags of Ukraine and the European Union mingle with red-and-black “blood and soil” nationalist banners. Across the country, the rallying cry of this revolt booms out countless times every day: “Glory to Ukraine! Glory to the heroes!”

The flag and the mantra of the protests were first used by guerrillas in the 1940s, who fought against Nazi and Soviet occupiers in a bid to carve out an independent Ukraine. They are still lionised by many people in western regions, while people in southern and eastern Ukraine, with closer ties to Russia, deride them as Nazi collaborators.

Historians say the guerrillas sometimes fought alongside Adolf Hitler’s forces in the hope of securing support for a sovereign Ukraine, and were involved in the killing of tens of thousands of Poles and the German-led mass murder and deportation of Jews.

On New Year’s Day, about 15,000 people took part in a torchlit procession through Kiev to mark 105 years since the birth of wartime nationalist leader Stepan Bandera, who is honoured with statues in western Ukraine but reviled in regions closer to Russia, as well as by Jews and Poles.

“Glory to the nation, death to the enemies!” chanted the crowd, led by members of a nationalist party called Svoboda (“Freedom”), which has risen rapidly from relative obscurity to be the fourth-largest party in parliament and jointly runs councils in western Ukraine. Liberal opposition parties distanced themselves from the march. Today’s “enemies” are president Viktor Yanukovich, whom critics accuse of leading Ukraine away from the European Union and back into Russia’s embrace.

Svoboda’s activists are now playing a major role in running Kiev’s main protest camp and buildings occupied by demonstrators. They were also prominent in resisting riot police who tried to storm the camp and in the highly symbolic toppling of a statue of Vladimir Lenin. Svoboda’s leader, former surgeon Oleh Tyahnybok, rouses protesters with firebrand rhetoric attacking the “anti-Ukrainian” forces running the country, and he has met visiting senior EU and US diplomats who would have shunned him in other circumstances.

Tyahnybok’s diatribes against corrupt politicians, tycoons and the Kremlin play well with the crowd, and the protests are helping him to push Svoboda towards Ukraine’s political centre.

How Svoboda will emerge from Ukraine’s turmoil remains to be seen, but its growing influence, hostility towards Russia and praise for Bandera could deepen the country’s divisions.

Svoboda also presents an easy target to the protesters’ foes: Ukraine’s premier Mykola Azarov has called them “Nazis and extremists”, while Russian president Vladimir Putin compared the rallies to a “pogrom”.