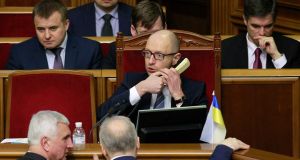 Ukraine and Russia are on a collision course over major trade and finance disputes, as the European Union prepares to extend sanctions against Moscow for annexing Crimea and fomenting a bloody conflict in eastern Ukraine.

Kiev has refused to meet Sunday’s due date on a $3 billion (€2.77 billion) loan that Moscow gave to authorities led by former Ukrainian president Viktor Yanukovich in December 2013, when they were rocked by huge street protests.

Moscow has vowed to take Kiev to court over the disputed bond, which comes due just as Russia gets ready to scrap its free-trade zone with Ukraine in response to the planned January 1st launch of a landmark EU-Ukraine trade pact.

“The government of Ukraine is imposing a moratorium on payment of the so-called Russian bond,” Ukrainian prime minister Arseniy Yatsenyuk said on Friday.

“I remind you that Ukraine has agreed to restructure its debt obligations with responsible creditors, who accepted the terms of the Ukrainian side. Russia has refused, despite our many efforts to sign a restructuring deal, to accept our offers.”

Russian officials have threatened to launch legal action by the end of the year to reclaim the cash from Ukraine.

“By announcing a moratorium on returning this sovereign debt, the Ukrainian side has, you could say, in fact admitted default,” said Kremlin press secretary Dmitry Peskov. Russia long argued that the unpaid debt should block future IMF funding for cash-strapped Ukraine, and Moscow was furious with the lender this week for changing its rules to allow aid to keep flowing to countries that are in arrears.

The IMF agreed with Moscow, however, that the bond should be treated as sovereign debt, and told Kiev that it must negotiate with Russia “in good faith” to ensure continued access to a $17.5 billion aid package.

Diplomats say EU states have agreed to extend sanctions on Russia for another six months from Monday, due to its continuing failure to fulfil a deal aimed at ending an 18-month conflict in eastern Ukraine that has killed more than 9,000 people.

“It was an expected decision, we heard nothing new, and it will have no effect on the economy of the Russian Federation, ” said Alexei Ulyukaev, Russia’s minister for economic development. Russia’s economy has been damaged by sanctions and above all by the plunge in the price of oil.

The Kremlin has ordered the suspension of a free-trade agreement between Russia and Ukraine from January 1st, when a far-reaching trade deal is due to start between Ukraine and the EU.