Theresa May tries to reassure EU leaders’ summit on Brexit 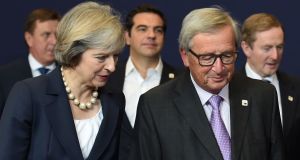 Theresa May sought to reassure European Union leaders on Thursday night about her approach to Brexit, as European Council president Donald Tusk asked her to clarify remarks she made to the Conservative party conference this month.

Some of her EU counterparts were alarmed by the prime minister’s apparent backing for a “hard Brexit” that would prioritise controlling immigration over remaining part of the European single market, and with the European Court of Justice having no jurisdiction in Britain.

At the start of the two-day summit in Brussels on Thursday, her first since becoming prime minister, Ms May criticised the decision of the other 27 EU member-states to hold some meetings without Britain.

Irish Minister for European Affairs Dara Murphy said that, although the European Council should not meet without Britain as long as it is in the EU, other formations were necessary.

“It’s my personal view that there must be meetings of the 27. This has been compared to a divorce and the decision to leave the EU was one taken by the British people. We didn’t want them to do it,” he said.

Mr Murphy said he could envisage other formations, such as the 27 remaining member-states and the three non-EU members of the European Economic Area – Norway, Iceland and Liechtenstein.

In her speech to the party conference in Birmingham, Ms May ruled out adopting models such as those of Norway and Switzerland, which are outside the EU but have full access to the single market and allow freedom of movement for EU citizens.

Tusk discouraged other leaders from engaging in a discussion of Brexit on Thursday night but French president François Hollande struck a defiant tone on his way into the meeting.

“I have said it very clearly: if Theresa May wants a hard Brexit, then talks will be hard too,” Mr Hollande said.

Downing Street said that Ms May’s intention at the summit was designed to establish a constructive tone in advance of the start of formal exit talks early next year.

The European Commission and European Council have ruled out any informal talks before the start of formal negotiations, which Ms May said would begin no later than the end of March next year. Some other EU leaders want Britain to start the process earlier, by invoking article 50 of the Lisbon Treaty as early as January.

An Ipsos Mori poll published on Thursday found the British public divided over what to prioritise in Brexit negotiations – 45 per cent think Britain should prioritise access to the single market, while 39 per cent said controlling immigration is more important.

Gideon Skinner, head of political research at Ipsos Mori, said opinion is largely split along the lines of how specific groups tended to vote in the referendum.

“Four months on from the referendum and the public are still split over single market access vs immigration control, with little sign of those on either the Remain or Leave sides changing their minds. This is only going to make Theresa May’s task to get a negotiation that satisfies everyone even harder,” he said.