Syria rebels sceptical about Turkey’s plan to tackle IS 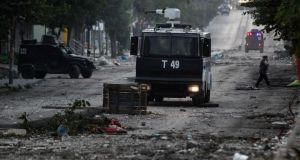 Syria’s rebels have cast doubt on Turkey’s ambitious plans to confront Islamic State, saying Ankara has yet to provide details of how it will drive jihadis from the Syrian border and create a “safe zone” for refugees.

While Syrian rebels said they welcomed the prospect of an increased coalition air campaign against the IS, they were not expecting a big contribution from Turkey after a series of what they regard as false promises from both the US and Turkey.

“The talk of a buffer zone surprised us – we have heard nothing like that,” said Munthir Sallal, a rebel official co-ordinating with the coalition who said rebel commanders met Turkish officials in Ankara yesterday.

Turkey and the US reached a new agreement last week on Turkish participation in the campaign against IS which will allow US aircraft to take off from bases within Turkey.

US officials have said the new plan will include more intensive US air operations in support of Syrian rebel groups to allow them take control of territory held by IS but said they would not designate any areas as formal no-fly zones.

The agreement between the US and Turkey, details of which are still being worked out, represents a middle ground that stops short of the US making formal commitments to defend specific zones in Syria but allows Turkey to argue that areas of sanctuary are being established in the country.

But while Turkey on Friday launched air strikes against IS, breaking with years of reluctance to confront the group directly, Ankara’s commitment to battling the jihadis remains unclear.

Over the weekend Turkey also pounded Kurdistan Worker’s Party (PKK) positions in northern Iraq, ending a ceasefire with the Kurdish separatists that are some of IS’s toughest foes in northern Syria.

Most Syrian rebels say the Turkish push for more forceful action in Syria is less about IS than about curbing the Kurds, who have been pushing back the jihadi group under coalition air cover.

Such advances have allowed them to expand westward and connect Kurdish territories along the border, sparking Turkish and rebel anxieties that the Kurds could be closer to forming a state.

“Given we saw three years of containment, appeasement and turning a blind eye, whatever you want to call it, I’m not convinced one week of events will put an end to this,” the diplomat said.

“They might be doing just enough to warn Isis [IS] not to mess with them, play tough for a domestic audience and hit the Kurds at a time when it may be to [President] Recep Tayyip Erdogan’s political advantage.”

An opposition activist close to the US confirmed plans for increased Turkish participation with the coalition, which began dispatching the first rebel units it trained and armed earlier this month.

The coalition has also been training activists from opposition councils in areas seized by IS to ensure a smooth transition to civilian rule.

But opposition members say they have been repeatedly promised by Turkey and the US that operations were imminent, and are sceptical.