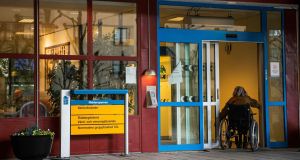 A woman enters her nursing home in Stockholm, Sweden, during the Covid-19 pandemic. File photograph: Jonathan Nackstrand/AFP via Getty Images

If these were normal times, you might have been greeted by Lovisa as you boarded your SAS flight somewhere.

Instead, for the last month, the 20-year-old Swedish woman has been a volunteer carer for elderly people with dementia and Alzheimer’s in a Stockholm residential care home.

After signing up via a system for grounded SAS staff, she now has first-hand experience of a bitter reality: of Sweden’s 3,529 Covid-19 dead so far, 88 per cent were over 70. About half of the total were in care homes.

“People in the homes are often sick in many ways, so I understand they don’t have a great chance if they get the virus,” said Lovisa, “but instead of five people, sometimes we had 15 people from outside the clinic walking the floor. And, at the start, the only protective gear we had was gloves and aprons.”

Sweden has attracted world attention for its alternative lockdown approach. This relied on citizens to limit their social contacts without forcing the closure of shops, restaurants, schools or gyms.

While interim numbers are of limited value, Sweden’s death rate is far higher than those of its Nordic neighbours: 32 per 100,000 people, compared with nine in neighbouring Denmark.

State epidemiologist Anders Tegnell suggests his country’s approach will pay off when a second wave hits later this year, as far more Swedes may be immune to the virus.

But other state officials fear that the road to Covid-19 hell in old-age homes was paved with poor preparation and the well-intentioned volunteer programme.

It was launched last month with a high-profile participant: Princess Sofia, wife of Prince Carl-Philip. On her first day volunteering at Stockholm’s Sophiahemmet hospital, she was pictured on Instagram wearing a carer uniform – but no mask.

Swedish state prosecutors have launched an investigation into the high death rate at care homes – which is at odds with the plan to erect a “protective shield” around older people.

Health minister Lena Hallengren said: “We as a society carry the responsibility that this sector was not better equipped.”

Lovisa and thousands of others were drafted in to fill staffing gaps that widened further when symptomatic staff were ordered to stay home.

She thinks her people skills and training – in particular in CPR resuscitation technique – were of some benefit to her. Despite the demands of shifts up to 12 hours long, she knows her contribution is making a difference for people who would otherwise have no one to dress, wash and feed them.

When she began work a month ago, however, Swedish public health guidelines did not require use of protective gear in homes unless a resident had Covid-19 symptoms.

“We got visors and masks this week but it’s kind of ridiculous,” she said. “We were told at the start we wouldn’t need them and now we do.”

Lovisa doesn’t understand why, for three of the last four weeks, she was allowed care for others’ grandparents with no protective gear – but, on health grounds, is not allowed to visit her own grandfather, living in a similar home.

Amid the rising care home death rate, being separated from their elderly parents unsettles many Swedes.

“When I visited my father before, I had to make sure the staff cleaned his room properly, not cut corners,” said Sara Lander from Uppsala. “I worry what things are like in there now.”