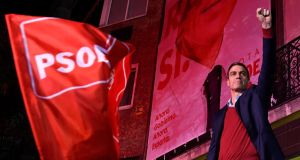 Spain’s Socialists have vowed to move quickly to form a new leftist government in the wake of the weekend general election, apparently ruling out a grand coalition with their conservative adversaries.

The Socialists, led by acting prime minister Pedro Sánchez, won Sunday’s vote with 120 seats – three fewer than in the last election in April – and leaving them well short of a majority.

The election also saw a surge by the far-right Vox, making it the third party in Spain’s parliament.

The Socialists must now look to other parties to build a parliamentary majority that would allow them to form a new administration. If a new government is not formed, Spain will face a third election in the space of a year. Sánchez told supporters on Sunday night that “whatever happens, this time we are going to create a leftist government.”

“Our commitment is for there not to be a third election, but rather a leftist government,” he said adding that such an administration would not be “a right-wing coalition”, a reference to speculation that the Socialists might govern with the conservative Popular Party (PP).

The PP was runner-up on Sunday with 88 seats, making some gains to recover somewhat from a dire result in April.

The Socialists’ most natural ally is Podemos, which was in fourth place on Sunday. However, with only 35 seats, it and the Socialists and the new Más País party, which won three seats, are slightly further from the 176 needed for a majority than they were before. The relationship between the Socialists and Podemos soured after the April election, as drawn-out negotiations to form a government collapsed and descended into a public feud.

Yet Podemos leader Pablo Iglesias has appeared to welcome the possibility of resuming talks with Sánchez.

“If [forming a government] was an historic opportunity after the April election, this time it’s an historic necessity,” Iglesias said. “It’s the only way to stop the far right.”

Sánchez has promised to move quickly to speak to other parties in an effort to form a new administration. However, he appears to have ruled out negotiating with Vox or Catalan pro-independence forces, which narrows his options substantially and would require the support of a number of separate smaller parliamentary groups, as well as Podemos.

With 52 seats, Vox has more than doubled its presence in Congress. The claim by its leader, Santiago Abascal, on Sunday night that the party had “changed the political map of Spain” seemed to ring true, as it overtook both Podemos and Ciudadanos.

For Ciudadanos it was a disastrous election, leading to the resignation of party leader Albert Rivera on Monday morning. Rivera had led the party since its foundation as a centrist Catalan regional force in 2006. Ciudadanos went nationwide ahead of the 2015 election and scored its best general election result in April of this year, winning 57 seats, as its hard line against Catalan secessionism seemed to pay off.

But Rivera’s subsequent refusal to negotiate the creation of a new government with Sánchez led to several senior figures leaving the party, exasperated at their leader’s apparent lurch to the right. On Sunday, Ciudadanos lost two and a half million votes, and retained only 10 seats, making Rivera’s position untenable.

Nonetheless, Ciudadanos could still play a role in the creation of a new government if it agrees to engage with the Socialists this time.

In his farewell statement, Rivera wished luck to those who remain on the political stage, “because there can be no excuses”, he said. He added: “This country has to be led well and not allowed to return to being all about reds [left] and blues [right], not allowed back to hatred and sectarianism.”