Russia-friendly new presidents to shake up Bulgaria and Moldova

Political uncertainty ahead for both states amid waning enthusiasm for EU 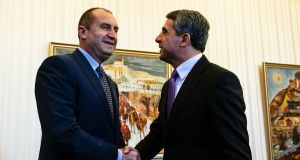 Bulgaria and Moldova face political uncertainty after presidential elections in both countries were won by candidates who seek warmer relations with Russia.

Bulgarian prime minister Boiko Borisov resigned on Monday in response to the defeat of his party’s candidate Tsetska Tsacheva, putting the EU and Nato member state on course for early parliamentary elections next spring.

In Moldova, Igor Dodon is celebrating a victory that he has pledged to use to rebuild ties with Moscow, a policy that would put him at odds with a government that sees deeper integration with the EU as vital to the impoverished country’s future.

A political novice who capitalised on his compatriots’ disappointment with Mr Borisov’s government and lack of enthusiasm for Ms Tsacheva, Gen Radev hailed a “victory for all Bulgarian people. Democracy has beaten apathy and fear.”

While making clear that he does not question Bulgaria’s membership of the EU and Nato, Gen Radev attracted some voters by calling for a rapprochement with Russia, which still plays a major role in the Balkan state’s economy.

“I will closely work with the government and EU colleagues to achieve the lifting of the sanctions,” he said, referring to measures taken against Russia in response to its 2014 annexation of Crimea and support for separatist militia in Ukraine.

Gen Radev (53) praised US president-elect Donald Trump for “seeking more dialogue with Russia”, saying it “gives a lot of hope for reducing [the risk] of confrontation, particularly in Syria”.

Neither his ruling centre-right Gerb party nor the main opposition Socialist party want to try to form a new government in the current parliament, so an interim administration will lead Bulgaria until snap elections next spring.

“I apologise to those who supported us. I thought I was doing the right thing,” said Mr Borisov, a former bodyguard who founded Gerb a decade ago.

“If Bulgarians want a political crisis then they shall have one,” he added.

In Moldova, a country wedged between Ukraine and Romania that is considered the poorest in Europe, Igor Dodon took 52.3 per cent of votes on Sunday to beat pro-EU former World Bank economist Maia Sandu on 47.7 per cent.

The Socialist party leader has always espoused turning back to Russia as Moldova’s main strategic partner, in opposition to a government that signed an association agreement with the EU in 2014.

Most Moldovans have seen little benefit from the country’s strategic turn to the West, however, and many officials which portray themselves as “pro-western” have proved to be corrupt and incompetent, tarnishing the appeal of EU integration.

“I also respect those who voted against me. I will consider the will of all voters,” insisted Mr Dodon, who before the election said his first foreign visit as president would be to Moscow.