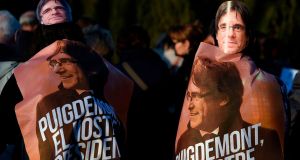 Disagreement over Carles Puigdemont’s plan to defy the Spanish judiciary and be sworn in as Catalonia’s president has split the independence movement and left the regional parliament in limbo.

An investiture debate due to take place in the Catalan parliament on Tuesday afternoon, with Mr Puigdemont the only candidate, was postponed indefinitely after the parliamentary speaker cited a lack of necessary legal guarantees.

Mr Puigdemont has been in exile in Belgium for the last three months and an arrest warrant has been issued against him for alleged sedition and rebellion. However, he was widely expected to attempt to be sworn in, despite a constitutional court ruling prohibiting from doing so from afar.

But on Tuesday morning, Catalan parliamentary speaker Roger Torrent announced his decision to put the investiture on hold, while insisting that Mr Puigdemont remained the candidate to be president.

“I have the duty to protect the sovereignty of this parliament from undemocratic interference and attacks, whatever the threats may be,” Mr Torrent said. “I will go as far as necessary to defend the rights of President Puigdemont in order to ensure he faces an investiture debate with all guarantees.”

The decision to postpone the session was widely praised by members of Mr Torrent’s own Catalan Republican Left (ERC), but other pro-independence politicians were critical of it.

Elsa Artadi, spokeswoman for Mr Puigdemont’s Together for Catalonia (JxCat) coalition, said “the guarantees are already there today and so is the absolute majority of 68 seats”. JxCat also claimed Mr Torrent had not made enough effort to inform Mr Puigdemont of the decision before announcing it.

If he faced an investiture vote, Mr Puigdemont would require the support of ERC and the anti-capitalist Popular Unity Candidacy (CUP) in the 135-seat chamber.

The CUP was also critical of the speaker’s decision, with the party’s Carles Riera saying that “democracy can’t be postponed”.

The divisions within the secessionist movement follow weeks of simmering tensions over the candidacy of Mr Puigdemont, who was removed as president in October, when the Spanish government introduced direct rule. If he does face and win an investiture vote, it is almost certain to be deemed illegitimate by the judiciary, meaning direct rule would be extended.

The Spanish government was reportedly pleased with the postponement, having opposed Mr Puigdemont’s candidacy ever since December’s Catalan election, which saw pro-independence parties retain their narrow majority. On Tuesday morning in a television interview, prime minister Mariano Rajoy had warned Mr Torrent not to “flout” the constitutional court’s ruling.

Ciudadanos, the leading unionist party in Catalonia, received the news of the postponement cautiously.

“It’s true that there hasn’t been a direct challenge to the constitutional court today, but nor has the real problem been solved, which is that Puigdemont cannot be president,” said Inés Arrimadas, leader of the party in the region.

Meanwhile, demonstrations were held in support of the pro-independence candidate, near the parliament building. By Barcelona’s Arc de Triomf monument hundreds of people gathered, wearing cardboard masks of Mr Puigdemont and chanting “Puigdemont is our president!”

“I’m optimistic, I have no other choice,” said Laura Arenas, who handed out masks to demonstrators. “We’ve had an election imposed on us by Spain, we won it and now we must have our government.”

If the stand-off continues and the Catalan parliament is unable to swear in a new president, then new elections will be called.